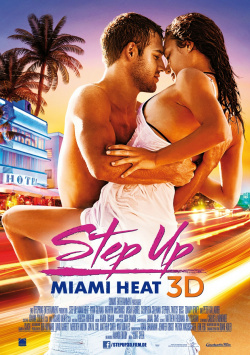 The dance movie wave that has been swept up to new heights by 3D technology just doesn't seem to die down. And so, shortly after Streetdance 2, the now fourth part of the currently most successful dance film series comes to our cinemas: Step Up: Miami Heat. Even if the film strictly follows the usual plot pattern for the genre and grazes every imaginable cliché in terms of content, the dance sequences and the visuals still leave a positive impression, which should make the film a great pleasure for fans.

Sean (Ryan Guzman) is a dreamer and idealist. He believes very strongly that he can make a difference with dancing. With his troupe, The Mob, he creates a lot of attention in Miami with elaborate and not always legal flashmob-style dance performances. When he learns that unscrupulous businessman Mr. Anderson (Peter Gallagher) wants to subject the historic neighborhood where Sean and most of his friends live to luxury redevelopment, making it unaffordable to ordinary residents, it's time to use The Mob's performance art to prevent the neighborhood's demolition. To that end, Sean's encounter with the attractive Emily (Kathryn McCormick) comes just in time. The girl, who desperately wants to become a professional dancer, has some important information about the planned redevelopment and some damn good ideas about how to stop it. Too bad Emily is Mr. Anderson's daughter and thus will have a hard time winning the trust of Sean's troupe. And so Sean decides to keep Emily's true identity a secret from his friends-a mistake he will live to regret.

As with parts 1 through 3, Step Up: Miami Heat is only very loosely connected to its predecessors. Only towards the finale a direct connection is established, which fans of the series should certainly be happy about. But apart from that, this fourth film again offers its target audience really good fodder for the eye. The dance sequences are very good, the performances of The Mob sometimes really great. In these moments it's a lot of fun to watch the perfectly choreographed hustle and bustle, even if you don't belong to the target audience anymore. This is also where the 3D effect comes into its own, especially the attractive bodies of the dancing actors.

The story remains a minor matter, but it follows a now too worn pattern. If you've seen more than one dance film in the past few years, you'll even be able to speak along with the dialogue in some scenes. The makers did indeed inject a spark of originality into the script by giving their dancing resistance movement an Occupy-style motivation. It's just too bad that the criticism of the machinations of powerful corporations was made absurd by an almost unintentionally funny twist at the very end. Here remains only the hope that the author Amanda Brody just wanted to be wonderfully self-deprecating and has used this twist quite deliberately and not that it is here a particularly stupid case of product placement.

Who just wants to see very good dancers with excellent performances, thereby more value on the music and the attractive optics, than on a substantial story, the Step Up: Miami Heat can really be recommended to the heart. Because in the mass of all very similar genre films, this work can at least visually stand out. And that makes the strip despite its thin plot framework then also: Worth seeing!