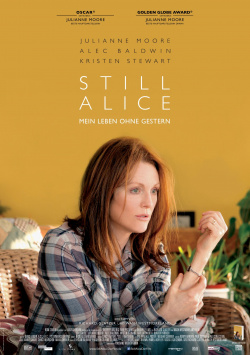 Still Alice - My Life Without Yesterday

Fifty-year-old linguistics professor Alice Howland (Julianne Moore) lives for language, for her knowledge, and for her profession. She's a luminary in her field, and she intends to live up to that reputation for as long as she can. But then seemingly small things happen that increasingly worry her: she forgets what should be a simple word during a lecture, loses her train of thought during her lectures, or suddenly doesn't know exactly where she is while jogging along the route she runs every day. A visit to the doctor then brings the terrible diagnosis: Alice is suffering from a very rare case of early Alzheimer's. Together with her husband John (Alec Baldwin), she decides to keep her illness a secret from her children Lydia (Kristen Stewart), Tom (Hunter Parrish) and Anna (Kate Bosworth) for as long as possible. But when she learns that this form of Alzheimer's is hereditary, she must confront her children with her own and their potential fate. And now it is the rebellious actress Lydia, of all people, with whom Alice has had a rather complicated relationship of late, who refrains from getting herself tested. She puts her own future on the back burner so that she can be with her mother now, while she still can.

Still Alice is a prime example of how even very heavy subject matter can be rendered emotional but not cheesy, unembellished but not too depressing. The two filmmakers Richard Glatzer and Wash Westmoreland have directed a very sensitive drama, which skilfully avoids any form of striking representation. Instead of melancholy consternation cinema, they have created very strong emotional cinema, in which one does not need to be ashamed of his tears as a viewer.

In only 23 days, the film was shot under difficult circumstances. Because Richard Glatzer suffers from the nerve disease ALS and was already unable to speak during the shooting. He communicated his instructions to the cast and crew using a special voice app on his IPad. Glatzer's illness, the tight shooting schedule and a very manageable budget of just under 5 million dollars, however, had no negative impact on the film. For it is not only the sensitive staging that leaves a thoroughly positive impression. Also on the acting level the drama can convince all along the line. Even Kristen Stewart, who is often scolded for her rather limited facial expressions, delivers a first-class and moving performance.

But no matter how well all the actors play, in the end this film belongs entirely to Julianne Moore, who quite deservedly won the Oscar and numerous other awards for her portrayal of the professor suffering from Alzheimer's disease. Her performance is so intense precisely because Moore maintains the necessary restraint in keeping with the staging. Large outbursts of emotion are used only in small doses. Primarily it is small details in movement and facial expressions as well as expressive looks that make all the changes Alice has to go through and the accompanying fear, anger and sadness so comprehensible.

This is of course very sad and also weighs on the mind. Still, Still Alice doesn't completely drag the audience down, but is simply an extremely moving, and in many moments, beautiful film that will linger long afterward, if only because of Julianne Moore's performance. If you are willing to deal with the difficult subject and generally have a soft spot for sophisticated US dramas, you should definitely not miss this great work. Definitely worth seeing

Cinema trailer for the movie "Still Alice - My Life Without Yesterday (USA 2014)"
Loading the player ...