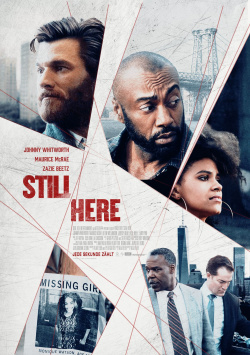 When 10-year-old Monique Watson disappears without a trace in New York, the police show little interest in recovering the girl. After all, the child is a black girl from a socially deprived area. Her desperate father Michael (Maurice McRae), on the other hand, tries everything on his own to find a trace of his daughter - without success. Journalist Christian Baker (Johnny Whitworth) senses an exciting story in the case and offers Michael his help, which he reluctantly accepts. When Christian takes the police's work in the crossfire in a first article, he doesn't exactly make many friends with the New York cops, which could make further investigations even more difficult. But then neighbors of the Watsons make a gruesome discovery. has this extinguished the last spark of hope?

The story of "Still here" actually sounds interesting. And in fact, the film could well have been a decent thriller with socio-political relevance. But screenwriter and director Vlad Feier does pretty much everything wrong that can be done wrong, so that the end result is a B-movie bursting with stupid clichés and flat dialogues that nips any good approach in the bud. Take, for example, the character of Christian Baker, played by Johnny Whitworth, who, with his Kurt Russell memorial hairdo, looks like an actor from a bad '80s direct-to-video action movie. When he's talking to his editor, his posture and constant gum chewing are meant to signal that Christian is an old-school journalist who doesn't play by the rules to get a good story. Add to this dialogue of the particularly clichéd kind, and the dialogue between the rebellious hack and his boss comes across as a bad parody. You just can't believe the director could have meant it seriously.

Similarly with the father of the missing girl. You watch him for minutes asking everyone for help, going door to door for information. But when a journalist comes to his door and offers his help, he flips out and sends him away under the threat of a beating. No, it's clear! The police are also very clumsily lured into the cliché trap here. So that even the last viewer understands that the skin color of the girl is the reason for the inaction of the police officers, the chief of police himself is allowed to let off a racist hate tirade.

The resolution of the whole thing can unfortunately not convince either. The explanation of why the perpetrator acted the way he did is simply a cheap excuse to force a happy ending at the drop of a hat. It's a real shame that Vlad Feier didn't make better use of the good basic idea and atmospheric locations to make it a really gripping big city thriller. So "Still here" has unfortunately become a boring and sometimes annoying collection of clichés and stereotypes that hardly deserves a "See worth".