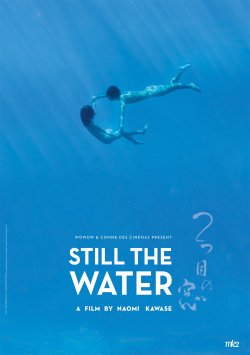 Young Kaito (Nijiro Murakami) has been living with his mother on the island of Amami-Oshima since his parents separated. Most of the time he is alone, as his mother is either working, or spending her time with lovers. However, this is not the only reason why Kaito feels uncomfortable on the island. He is also afraid of the sea, a fear that is only confirmed when one day he discovers a dead body on the beach. He tells no one about this gruesome find, not even his girlfriend Kyoko (Jun Yoshinaga), who, unlike him, loves the sea. With Kaito, Kyoko desperately seeks support as her beloved mother lies dying. She wants to drown her fear of loss in love and tenderness. But Kaito is not willing to sleep with her. And that, too, has something to do with his fear of the sea and the dead man on the beach...

Still the Water by director Naomi Kawase is a film that critics feel they absolutely have to like. The production is filled with mesmerizing imagery and overt symbolism, accompanied by a narrative pace that defies any form of mainstream. The story tells of love and death, of the end of life and the emergence of first sexuality. All this is told in a very atmospheric, but also very unwieldy way - just the way festival juries and feuilletons like it. But what about the normal moviegoer? Will they be able to make friends with such a work?

No question, Still the Water is not a film for the multiplexes. Even in arthouse cinemas, it is likely to appeal to only a small niche audience. You have to be able to engage with poetic art cinema to appreciate all the film's strengths. Since the distributor has decided to leave the drama in the original Japanese and only fade in German subtitles, viewers in this country will be additionally challenged. These are all challenges that one must be prepared to face. But if that's what you're looking for, and you want to see a change from the usual arthouse fare from Europe, you can definitely indulge in the rush of images.

Because if you can get into it, the story Kawase tells is full of poetry, beauty and emotionality. Admittedly, some scenes, with their slowness and overly obvious call to be interpreted by the viewer, make it hard not to be seen as tough or even boring. But the audience for whom this film is being released is unlikely to be bothered by that. And exactly for such program cinema lovers then also applies: thoroughly worth seeing!

Cinema trailer for the movie "Still the Water (Japan 2014)"
Loading the player ...