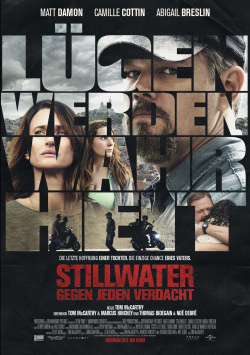 Stillwater - Against All Suspicion

Once and again, drill worker Bill Baker (Matt Damon) from Stillwater, Oklahoma, travels to Marseilles to visit his daughter Allison (Abigail Breslin). The latter was accused of murdering her friend while studying abroad. Since the conviction, she has been sitting in prison in Marseilles, still hoping to be proven innocent. When new evidence emerges that could exonerate Allison, but her lawyer refuses to reopen the case, the taciturn American takes it upon himself to try to gather the evidence that could get his daughter out of prison. But the existing language barrier and cultural differences make this task almost impossible. But then Bill gets unexpected help from Frenchwoman Virginie (Camille Cottin). As he builds up a close relationship with her and her little daughter over time, everything seems to turn out well, at least for Bill. But then chance leads him to make a momentous decision...

"Stillwater" is the latest directorial effort from Tom McCarthy following his two-time Oscar-winning drama "Spotlight". Inspired by the Amanda Knox case that made headlines around the world, McCarthy tells of a father's desperate attempts to free his estranged daughter from prison. In the trailer, this looked a bit like it was going in the direction of the "Taken" movies. But that is not the case at all. Instead, the film is an occasionally quite exciting and surprisingly emotional character study with an excellent Matt Damon. He disappears fully into the role of the very simple-minded, beefy American who must face more than just cultural hurdles in a foreign land.

Not too much should be said about the twists and turns of the story at this point. I can say this much, though: despite his secretive nature, which at times comes across as a bit abrasive, Bill quickly grows on you. You wish that he will succeed in finding out the truth and maybe also become really happy. What happens next, however, has an unexpected emotional impact that lasts until the end, especially considering the otherwise rather unexciting production. This also gives the film a very lasting effect, as you can think about the last act and its consequences very long and intensely.

"Stillwater" is a gripping drama with a great cast - besides Matt Damon, Abigail Breslin and Camille Cottin, known from the French series "Call my Agent", can convince all along the line - and a dramaturgy that is exciting and moving at the same time. A really great film that is so much more than the trailer promises. Absolutely worth seeing!

Cinema trailer for the movie "Stillwater - Against All Suspicion (USA 2021)"
Loading the player ...