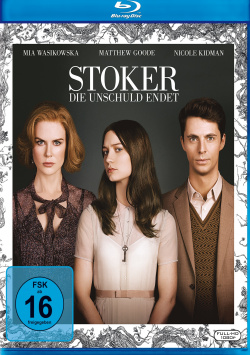 Film: For India Stoker (Mia Wasikowska), her 18th birthday should have been a very special, happy day. But the sudden accidental death of her father Richard (Dermot Mulroney) turns the girl's world completely dark all at once. Her mother Evie (Nicole Kidman) India brings only rejection and coldness. When her uncle Charlie (Matthew Goode), who has lived abroad for many years, shows up and wants to settle down in the broken family for a longer period of time, India feels abandoned by life. There is only anger and distrust in her. At the same time she notices that the mysterious Charlie exudes a fascinating charm, to which not only her mother seems to succumb. India, too, finds herself increasingly drawn to her mysterious uncle, unaware that she is connected to him in a particularly sinister way...

With Stoker, acclaimed Korean filmmaker Park Chan-Wook delivers his Hollywood debut. Of course, there were fears that the Oldboy director would have to swap his sometimes very drastic and non-conformist style for a more conventional and crowd-pleasing production due to pressure from US studios. This may be true in some respects, Stoker being much more straightforward than, say, the unusual vampire thriller Thirst. But that doesn't make the thriller well-behaved or slick.

The screenplay for the film was written by actor Wentworth Miller (Prison Break), who submitted the script under a pseudonym and landed it on the so-called Black List of the 10 best yet unproduced screenplays in 2010. Miller was inspired to write his story by the Hitchcock thriller In the Shadow of Doubt, to which he pays tribute throughout the story. But despite some minor structural similarities, Stoker is an entirely original work that begins as a drama, then morphs into a mystery thriller, only to culminate in tangible horror.

With a mesmerizingly morbid visual aesthetic, eerily beautiful shooting motifs, and a near-perfect set, Park Chan-Wook establishes an atmosphere within moments of the opening credits that is very difficult to escape. This engaging mood is supported by the very strong actors, who seem artificial in a great way, but still not artificial. Mia Wasikowska plays her complex role with a mixture of coldness and vulnerability, of seduction and insecurity, of youthful innocence and sly malice. Equal to her is a great Matthew Goode, who, in a smart Gary Grant look, thrills as a shady charmer with a very dark side. The fact that Nicole Kidman remains a little pale next to the two, is not so tragic, because this fits exactly to her role and fits so perfectly into the cleverly constructed story structure.

The film seems to reveal relatively quickly, who Uncle Charlie really is, but the story still holds some surprises in its course, by which the tension level is kept until the great finale at a consistently high level. With a good pinch of deep black humor and some moments of macabre beauty, even the more conventional scenes of the film become something very special. Even though there are numerous borrowings from the œuvre of Hitchcock and other genre representatives, Park Chan-Wook has succeeded in creating a visually, dramaturgically and atmospherically great mystery-horror-thriller based on Wentworth Miller's script, which fascinates, surprises and entertains in the best possible way. A disturbingly beautiful work that fans of noble and sophisticated genre entertainment can warmly recommend. Absolutely worth seeing!!

Picture + Sound: The film gets a very special atmosphere just through its visual implementation. And this also comes on the Blu-Ray through the coherent color mixing, a high level of detail sharpness and very good contrasts excellent. The sound, which is available in German in a decent 5.1 DTS mix, is dominated primarily by the dialogue and the atmospheric film music. However, well-implemented ambient sounds and minor sound effects also provide a tapestry of sound, with the surround channels coming into play every now and then as well. Good!

Extras: The Blu-Ray has plenty of bonus material to offer. Starting off, there are three dropped scenes (about 10 mins) and two slideshows worth watching. In the first there are photographs of Mary Ellen Mark to see. The second shows how a cinema in London was decorated for the premiere in the perfect Stoker design. The best extra on the disc is undoubtedly the good making of (approx. 28 mins), which offers a good insight into the production and the language and cultural barriers it required to overcome.

Five short promo featurettes on the characters (approx. 3:33 mins), the director's vision (approx. 3:28 mins), the style of the film (approx. 3:02 mins.), the film's score (approx. 2:39 min.), and the design of the International Limited Edition poster (approx. 2:55 min.), on the other hand, offer only a few interesting additions to the making of, especially since some sequences from the longer documentary are also repeated here.

Finally, in addition to the trailer for the film, there is a look at the premiere in Korea. Here the viewer gets a glimpse of the goings-on on the red carpet (approx. 15:38 min.) and can then listen to a live performance by Emily Wells (approx. 4:46 min.). A pretty comprehensive and good bonus package overall!

Conclusion: Stoker is a dramaturgically and atmospherically great mystery-horror-thriller that offers sophisticated genre entertainment with a bit of Hitchcock flair. The atmospheric visuals come across very well on the Blu-ray. But also the extensive bonus material offers a good reason to grab this disc. Absolutely recommendable!