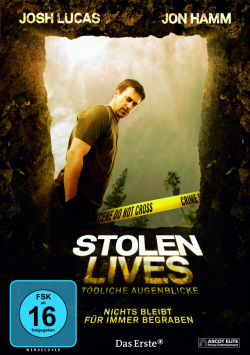 Film: Detective Tom Adkins ("Mad Men" star Jon Hamm) has been trapped in a dark emotional hole since his son disappeared without a trace eight years ago. He doesn't want to admit to himself that Tom Jr. could be dead and looks for any clue that might give him an answer to the whereabouts of his boy. The case of little John Wakefield, who disappeared fifty years ago in a very similar way, could be exactly such a clue. Tom is determined to solve the mysterious death of the boy. And in fact there are soon hints that lead him to believe in a connection between John and Tom Jr....

"Stolen Lives - Tödliche Augenblicke" is a quiet, yet gripping thriller that can establish a certain level of tension by interweaving two stories. The two storylines, the one about Tom Adkins and the one about a widower (Josh Lucas) and his three sons fifty years earlier, are more about drama than thrillers. But the connecting element, the disappearance of two boys and the probable murder of the children, as well as Tom's desperate attempts to find out the truth, make the whole a thoroughly stirring thriller.

Here and there it becomes apparent that there was no big budget available here. For example, a character who is still a young man in one level of action reappears fifty years later - with a make-up that can be clearly identified as such. But really disturbing aren't such flaws in the staging of the story, as both the story itself and the actors' play are intense enough to captivate the viewer. Especially Jon Hamm, who has repeatedly proven his acting range in such different works for the award-winning series "Mad Men" or the comedy "Brautalarm", delivers a great performance. But also Josh Lucas, ex-"Dawson`s Creek" star James Van Der Beek or Rhona Mitra convince with their credible portrayals, which correspond very well to the atmosphere of the film.

"Stolen Lives - Tödliche Augenblicke" sometimes seems "only" like a good TV production, but the thriller drama never seems cheap. Both the camera work as well as the equipment are absolutely worth seeing next to the good actors and the engaging story. So if you like quiet, but nevertheless exciting entertainment with a high standard, you will be served in the best possible way despite some minor weaknesses. Worth seeing!

Picture + Sound: While the picture has a high degree of sharpness in brighter moments and is quite convincing in terms of colour mixing and contrasts, some weak points become visible in darker moments with smaller blur and slight picture noise. The tone is calm and atmospheric, whereby the dialogues are more strongly mixed in the German version than in the English original. There, however, the ambient noises come to the fore somewhat better. Altogether there is a deserved one for the technical conversion: Good!

Extras: Unfortunately there are no further extras apart from the original trailer to the film and a trailer show of the supplier. Too bad!

Fazit: "Stolen Lives - Deadly Moments" is an engaging thriller drama that can score with a cleverly constructed story and good actors. The DVD is on a good level in terms of picture and sound, only the bonus material is disappointing. All in all, however, this is enough to warmly recommend the film to friends of quiet thrillers!