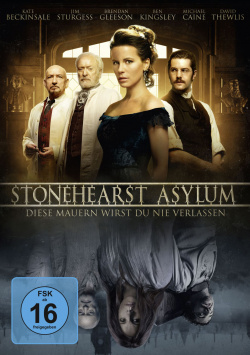 Content: In 1899, young ambitious doctor Edward Newgate (Jim Sturgess) arrives at the remote Stonehearst Sanitarium to learn from the renowned Dr. Lamb (Ben Kingsley) the newest, revolutionary methods for the treatment of mental illnesses. The asylum houses particularly well-heeled patients, including the beautiful Eliza Graves (Kate Beckinsale), who immediately has a special attraction for Edward. But the young man is also intrigued by the conditions at Stonehearst, where patients are free to roam and let their madness run wild. It seems like the perfect place for his training. But when he follows strange noises one night that lead him to the basement of the asylum, he uncovers a cruel secret that makes his stay at Stonehearst an extremely dangerous affair, and not just for him...

Director Brad Anderson has already more than impressively proven that he knows how to use asylums as the setting for atmospheric horror in his dark Session 9. In Stonehearst Asylum, he once again goes behind the walls of such an institution, but this time, unlike Session 9, it is still inhabited by patients and staff. Based on a short story by Edgar Allen Poe, Anderson has directed a scary tale that is old-fashioned in the best sense of the word, scoring points with an atmospheric set, a few effective goosebump moments and a great ensemble of actors. From Michael Caine to Ben Kingsley, Kate Beckinsale and Brendan Gleeson to Jim Sturgess, not only the main characters but also smaller supporting roles are truly top-notch.

What the film lacks, on the other hand, is a certain independence. Too often memories of movies like Shutter Island or even the second season of the series American Horror Story come up. The really big surprises are missing, which makes the tension suffer a bit. The fact that the visit to Stonehearst Asylum still turned out to be so worth seeing is thanks to Anderson's sense for a dense atmosphere. It's hard not to get caught up in the gloomy mood of the production and fall for the very special charm of this story.

For those for whom lots of blood and guts make a good horror movie, this home movie premiere will probably bore you. But for those who appreciate solid old-school scares and don't mind a classic love story alongside a dark mystery plot, Anderson's latest directorial effort is not to be missed. No milestone of the genre, but first-class staged goosebumps cinema - and for this there is then also a very clear: Absolutely worth seeing!

Picture + Sound: The picture and sound quality of the DVD is on a good to very good level. While the sound remains rather restrained according to the atmosphere of the film, but has to offer some very effective surround moments, the very clean picture convinces with a good overall sharpness and an atmospheric color scheme. Good contrast and neatly matched black levels ensure that the picture has very little drop-off in quality, even in the numerous darker sequences. Good!

F Conclusion: Stonehearst Asylum is a classic creepy tale that tells its exciting story in atmospheric images. A little bit of Shutter Island, a pinch of classic creepiness in the style of Hammer Studios and of course the typical Edgar Allan Poe flair makes the film adaptation of a short story by this master of horror a gripping mystery thriller, which also scores with a first-class cast ensemble. If you generally appreciate old-school, bloodless goosebump cinema, you should definitely get this DVD, despite the lack of extras. Recommendable