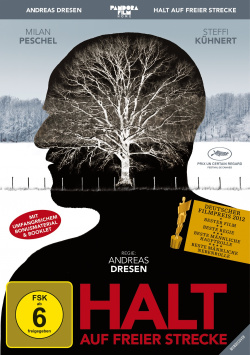 Film: It seems that director Andreas Dresen likes to call a spade a spade the things that are generally not talked about. So in Wolke Neun he drew a rather open and honest picture about love and sex in old age. If this was already a taboo for many, Dresen now dedicates himself in Halt auf freier Strecke to topics about which the cloak of silence is spread even more extremely, although it affects every human being and accompanies us every day: dying.

This is what Frank Lange (Milan Peschel) is confronted with when he learns the shocking diagnosis: he has a brain tumour that cannot be removed. Frank is going to die. The only question is when and how. Frank is determined to spend the time he has left at the side of his wife (Steffi Kühnert) and his two children in the home he has just bought. This is where the slow, painful process of dying and the actually impossible attempt to come to terms with this situation now begin.

After intensive research and with the help and cooperation of doctors, Dresen has directed an enormously powerful portrait of a dying man, staged extremely authentically by the actors without a fixed script. Milan Peschel's performance alone is simply magnificent. The sober staging, which completely dispenses with artificial dramaturgy and even makes use of a particularly bizarre form of humour here and there, almost makes the viewer forget that we are watching an acted story here.

What makes the film stand out and in a way also important, however, is also its greatest shortcoming. For it begs the question of what is supposed to move the viewer to watch nearly two hours of one man's miserable suffering, with no prospect of a happy ending. Because for most people film is still a form of escape from reality and even with quite authentic stories there is still the need to feel good after watching and to be released into everyday life in a positive mood at the end. But that's impossible here. Halt on the Open Road is a punch in the stomach, an unforgiving slice of reality that hurts. The film makes it clear that it's actually impossible to lose your fear of death.

However, this film can also help. People who have experienced similar things may feel understood here, can process their grief and perhaps even draw new strength from the honesty of the production. For Dresen skilfully avoids any sensationalism, always remains intimate and reserved in his painful honesty in a certain way and thus never allows the suspicion to arise that he is deliberately trying to break a taboo in order to get as much attention as possible.

Stop on a Free Road is difficult to recommend. Because watching this film is truly not a pleasure - nor should it be. It is a powerful piece of drama cinema, a piece of reality made into a film. For those who want to be confronted with it, the drama can definitely be recommended. But if reality is already reality enough for you, you could easily be disturbed by the relentless force of the film.

Picture + Sound: The DVD's picture is very clean and has a good sharpness of detail, which can only be observed to a limited extent in the scenes filmed with the iPhone camera. Appropriately for the mood of the film, the colour scheme is somewhat undercooled, but always looks very authentic. The same goes for the sound, which is very restrained for long stretches, sometimes dominated by complete silence, but otherwise by the dialogue and minimal ambient noise. Good!

Extras: The DVD has some interesting extras to offer. Starting off right when you open the DVD is a 36 page comprehensive booklet with extensive interviews and film info. The actual bonus material on the DVD starts with a very insightful audio commentary by director Andreas Dresen, who talks about the making of the film in a very calm and pleasant way.

Conclusion: Halt auf freier Strecke is a heavy drama, a great challenge, but also a special viewing experience that lingers long thanks to the authentic staging and the strong performance of Milan Peschel. On DVD, the drama presents itself in good picture and sound quality and is also complemented by some extras worth watching. Who is ready to face the hard impact of this story, this DVD can be absolutely recommended