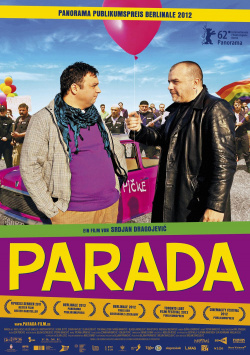 The unsuccessful theatre director Mirko (Goran Jevtic) and his partner, the veterinarian Radmilo (Milos Samolov) have a dream: together with a small group they want to organize a gay pride parade in Belgrade. But this seems to be a hopeless undertaking, as the police won't offer them any protection and they are repeatedly attacked by right-wing radicals even during the preparations. But when Mirko, who earns his living as a wedding planner, is hired by Pearl (Hristina Popovi), the fiancée of petty criminal Limun (Nikola Kojo), the tide may turn. Because even though Limun is a homophobic macho of the worst kind, Pearl is clearly calling the shots in the relationship. And after her lover drives the wedding planner away with his homophobic posturing, she gives Limun an ultimatum: only if he not only lets Mirko host the wedding, but also provides security for the gay pride parade, will she not leave him. Reluctantly, the war veteran agrees to the deal, unaware of the problems it will cause him.

With Parada, filmmaker Srdjan Dragojevic has managed a real surprise hit in the Balkans. There, the tragicomedy was able to attract over 600,000 visitors to the cinemas - a real sensation given the subject matter. It is a film about tolerance, but also about healing old wounds in the former Yugoslavia. As a member of the Serbian Socialist Party, Dragojevic, a trained psychotherapist, had to experience extreme hostility and attacks by right-wing radicals in his fight for human rights. However, this has only strengthened his conviction that he wants to do something against hatred and oppression. Knowing full well that films cannot change the world, he is primarily interested in providing food for thought that could perhaps provide the breeding ground for important changes.

And he achieves this in Parada, in which he amusingly plays with clichés about homosexuals, machos and old enemy images, exaggerating them a little and mixing them together in a colourful way. When Limun and Radmilo travel through the former republics of Yugoslavia to recruit a troop of protectors for the gay pride parade, the film is bursting with bite and profound humour. But unfortunately, it doesn't always work equally well. While the humor at the beginning of the film is still a bit indecisive and cramped, a very extreme change of mood at the end seems alienating. Although this is dramaturgically absolutely necessary. After all, the Gay Pride Parade through Belgrade in 2010, where the participants, protected by 5,000 police officers, were attacked by 6,000 hooligans, was the model for the film's story. And this sad event, of course, cannot be viewed humorously. Still, the drastic finale just doesn't quite want to fit in with the rest of the film, which also has dramaturgical depth, but is overall staged in a much lighter and more lighthearted manner.

Parada, however, despite its flaws, is a very important film that should also be extremely entertaining for fans of arthouse comedy with a difference. It is a film made with very high ambitions, but also with a lot of love and heart, trying to stand up to hatred and prejudice. The box office result from the Balkan region makes at least a little courage that films can perhaps do more than just entertain well and gives hope that in the minds of people who still cling to deep-seated prejudices, something moves in the right direction after all.

Cinema trailer for the movie "Stop (Serbien/Kroatien/Mazedonien/Slowenien 2012)"
Loading the player ...