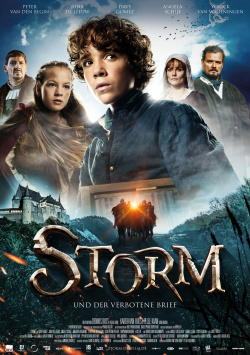 Storm and the forbidden letter

During the time of the Reformation, 12-year-old Storm (Davy Gomez) lives with his parents in Antwerp. Here, his father Klaas (Yorick van Wageningen) runs a printing shop. The family leads a simple but tranquil life until Klaas accepts a secret commission to print a letter from Martin Luther. This brings him into the sights of the merciless inquisitor Frans Van der Hulst (Peter Van den Begin), who has Klaas arrested. But before the city guards can destroy the letter, Storm manages to escape in the typesetting ship. With the help of orphan girl Marieke (Juna de Leeuw), Storm must now try to save his father from the stake and bring the letter to safety. A merciless chase through the city begins, which becomes an important fight for freedom.

Storm and the Forbidden Letter shows what a really good kids' movie can look like when the makers take their target audience seriously and trust them to find a movie good without cool lines, flat fart jokes and completely overdrawn characters. Director Dennis Bots has staged a really exciting film that boasts convincing actors, an atmospheric set and decent effects. In addition, the story about tolerance, especially with regard to a person's faith, has a high degree of topicality. However, Bots resists the temptation to convey this message too clumsily with the moral index finger, which is to his credit.

Of course, the characters here are drawn rather one-sidedly. The Inquisitor is a walking cliché of a movie villain, and even the man who betrays Storm has this written all over him from the first scene he appears in. Still, the whole thing just works, as the script and actors are able to breathe enough life into the characters to comfort over any clichés. The narrative pace is consistent, though Bots isn't afraid to break the tension at times with a few quieter moments that give younger viewers a chance to relax and the film's characters a little more depth.

Storm and the Forbidden Letter is a great children's film: a timelessly good, exciting adventure with an important message, good actors and atmospheric images. A real godsend that will hopefully find its audience in this country in all the clutter of animated films and 3D adventures. Absolutely worth seeing

Cinema trailer for the movie "Storm and the forbidden letter (Niederlande 2016)"
Loading the player ...