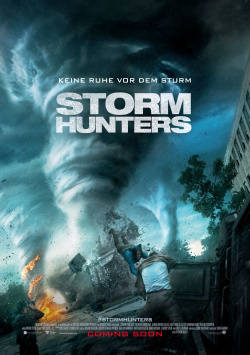 The team of storm hunters Pete (Matt Walsh) and Allison (Sarah Wayne Callis) are on the hunt for the perfect tornado. Using cutting-edge technology, they aim to capture once-in-a-lifetime footage from the eye of a twister. All predictions steer them toward the town of Silverton, where assistant principal Gary (Richard Armitage) and his two sons are preparing for the big graduation ceremony at the high school. But the weather quickly puts a crimp in the celebration when a first tornado hits Silverton. But while most believe that's the worst of it, the storm chasers are sure the worst is yet to come. And indeed, a tornado of unimagined proportions seems to be brewing nearby. And now, of all times, Gary's son Donnie (Max Deacon) and his classmate Kaitlyn (Alycia Debnam-Carey) are missing.

Now 18 years ago, the tornado blockbuster Twister stormed the international movie charts. Although there was always speculation about a sequel, Jan de Bont's disaster movie has remained the only major box office upset to date. Until now, because now Final Destination 5 director Steven Quale is preparing to put Twister in the shade in terms of animation with Storm Hunters. Although there are no flying cows in Quale's film, several small tornadoes unite to form a gigantic superstorm that literally makes the cinema shake. But are grandiose effects enough to make Storm Hunters a thrilling, all-around successful disaster movie? In the first thirty minutes it looks unfortunately so not at all.

Because until here at least in the figurative sense the cow flies, first of all completely unnecessary family dramas are established, which dissolve in the face of the tornado but then completely into thin air. There is the single father, who never has time for his sons and is actually only annoyed by their pubescent behavior. And the young mother, who is torn between child and career, can't be missing either, as well as the jackasses, who are supposed to provide a few laughs with their Jackass stunts. Sure, Twister also had primarily stereotypical characters and an extremely predictable dramaturgy to offer. Still, Jan de Bont was much more successful in making the characters somehow sympathetic and the story exciting than is the case with Storm Hunters.

The reason for this could be the decision of the makers to shoot the film in the popular found footage look. The viewer sees the action from the point of view of video cameras, surveillance videos, news footage or cameras attached to cars. This is supposed to make you feel like you're right there in the tumultuous action, but the exact opposite actually occurs. Especially since towards the end this gimmick isn't really executed consistently and believably anymore. Thus, in the last third there are shots to be seen over and over again that definitely couldn't have been caught by one of the video cameras. And the fact that a standard digital camera can change its perspective on its own and even mutate into an underwater camera at the end without breaking isn't exactly plausible either. Only the fact that it is more important to many people to record everything with a camera instead of helping others or bringing themselves to safety, unfortunately corresponds to reality and could even be seen as a satirical commentary on the YouTube generation due to the exaggeration shown here.

Apart from the terribly flat dramaturgy, the correspondingly pale actors and the sometimes somewhat annoying shaky-cam optics (which, however, fortunately keeps within limits) Storm Hunters is quite fun. As a pure special effects entertainment film, the whole thing works very well. But as soon as the focus is not on the tornadoes, but on the people, the film is more of a lukewarm breeze than a stormy delight. If a few minutes of great tornado action are enough to sweep over the weaknesses, this movie can be recommended to you. But if you're hoping for more, you'll be bitterly disappointed. Worth watching with some reservations