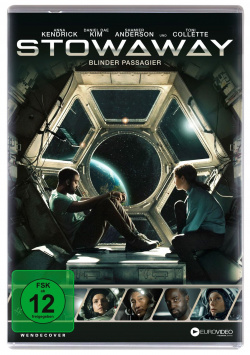 Film: It's the start of a revolutionary mission to Mars that the three-man crew led by Captain Marina Barnett (Toni Collette) faces. Along with medic Zoe (Anna Kendrick) and biologist David (Daniel Dae Kim), Barnett flies to the red planet. But the perfectly planned flight turns into danger for all involved just hours after takeoff when they discover they are not alone. Due to an accident, Michael (Shamier Anderson) has landed on the spaceship as a stowaway. With a return to Earth out of the question, the astronauts begin planning to successfully complete the mission as a foursome. But then there is an irreparable defect in the supply system, so that the oxygen will not be enough for four people. There is little time to make a hard decision before all their lives are in danger....

The German-made production "Stowaway". is a gripping space chamber drama that combines some "Gravity"-style moments of suspense with essential questions of ethics and humanity into a coherent whole. While the film was exploited worldwide directly on Netflix, it was allowed to be shown on the big screen in Germany shortly after the long lockdown. Now it appears for home cinema, where the story is no less powerful. At the same time, Joe Penna's production seems very conventional at first. The characters are almost clichéd and the dramaturgy treads very familiar paths. But this impression changes after a few minutes. With the discovery of Michael and the resulting decisions the characters are allowed to show more and more new facets. And also the story gets much more depth and tension, which also lasts until the end.

An important factor that all this works well is not only the acting of the actors and actresses, but also the set and the effects. Both are so convincingly realized that the audience actually has the feeling of being aboard a spaceship on its way to Mars. The nightmarish aspect works especially well, and surprisingly, it also takes hold in the scenes where members of the crew move around in space outside the ship.

"Stowaway" eschews rousing action in most moments, but uses it very effectively in spots. Otherwise, interpersonal drama dominates the proceedings, leaving you pensive at the end. Because you inevitably ask yourself the difficult question, what decision you would have made yourself in this situation. Even if the movie has some little lengths and has some small dramaturgical weaknesses, the overall picture can really convince in the end. Therefore, if you like movies like "Gravity", "Stowaway" is absolutely worth seeing!

Image + Sound: The DVD convinces on a visual level with a high overall sharpness, which only reveals minor weaknesses in very dark scenes. Contrasts are well matched and the colour scheme is very atmospheric. Smudges or other weaknesses are not apparent here. The audio is available as a Dolby Digital 5.1 mix, which not only makes the dialogue sound powerful from the speakers, but also matches the occasional sound effects very well to the action. Good!

Extras: Unfortunately, there is no bonus material apart from the trailer. Too bad, because it would have been quite interesting to learn more about the filming and the background of the exciting story.

Conclusion:"Stowaway" is a thrilling space thriller, which deals with actually very simple means quite large, important issues. Thrillingly staged and well acted and therefore absolutely worth seeing! The DVD presents the film in good to very good audiovisual quality. Only bonus material is unfortunately missing. Nevertheless: The bottom line is that the film is strong enough to be able to attest here a "Recommendable" with fullest conviction.