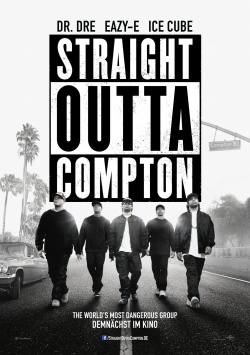 With the rousing biopic Straight Outta Compton, director F. Gary Gray fulfilled a wish of his heart. He wanted to memorialize the band that has been a thorn in the side of moral apologists, the police, and even many conservative media outlets, but that has shaped rap music like few other formations. In close collaboration with Dr. Dre and Ice Cube, who is embodied here by his own son, a music drama was created, by which you are carried away even if you actually have little to do with rap and hip hop. Granted, you shouldn't expect an overly critical examination of N.W.A.'s songs and some of the members' missteps. After all, the main point is to pay tribute to the band and its importance to the rap scene and the Black community in the United States. But even though this lacks a certain critical distance, it does very little to change the extremely high entertainment value of the film.

The excellent choice of actors, the perfectly placed music that you can't help but bob along to, and an 80s/90s aesthetic that is well captured on all levels quickly make up for minor lengths in the last third and some common biopic clichés. In some scenes, Gray makes it almost frighteningly clear how current the issues regarding racism and police violence, which repeatedly take center stage, still are after more than twenty years. That's why Straight Outta Compton is much more than a simple artist biography. Rather, the film has a certain relevance and explosive topicality from a socio-political point of view.

It would have been desirable, however, precisely because of this, if the film had taken an equally critical stance with regard to the image of women, which is drawn in so many rap lyrics of the protagonists as well as in the film itself. To denounce one injustice while another is more or less celebrated is perhaps authentic to this scene, but also a wee bit mendacious. However, that's the only real criticism of an otherwise really great film that manages to convince on almost every level. Acting (Paul Giamatti is great as always, but by far not the best actor of the ensemble), visually and of course musically Straight Outta Compton offers first-class entertainment not only for fans of Dr. Dre, Ice Cube and Co. and for that there is also a clear: Absolutely worth seeing!