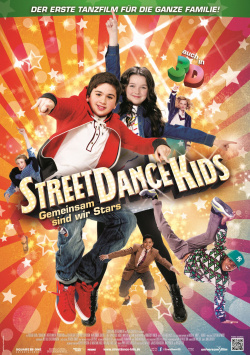 In the streets of London you can dance again: After two streetdance films so far have mainly featured teenagers showing off their cool moves, it's now the kids' turn. One of them is Jaden (Akai Osei-Mansfield), who is shocked to learn that his beloved youth club is to be closed. The passionate street dancer wants to prevent this at all costs. His classmate Ethan (Theo Stevenson), who is known for his quick wit and ingenuity, could help him. Too bad Ethan has other things on his mind. He wants to impress a new classmate, but she only likes really talented dancers. Of course, Ethan can't exactly impress her with his two left feet. But that's where he and Jaden come together. They want to put on a charity show whose furious finale will be a dance battle between Ethan's not-yet-existent dance troupe and his rival's successful gang. Not only could the youth club be saved, but Ethan's heartbreak could also be quenched. But finding a suitable crew for the Battle isn't the only thing that proves to be a major stumbling block in this plan.

Strictly speaking, the German film title Streetdance Kids is a sham. Although the producers of the two Streetdance films were also at work here, the flick, which is called All Stars in the original, does not belong directly in the successful dance film series. But since the dramaturgical similarities are so striking and Streetdance 2 had little to do with the original film from 2010, this can be well overlooked. Because if you expect a kid-friendly streetdance movie based on the title, that's exactly what you get.

Sure, the dialogues aren't particularly profound, the dramaturgy is as worn out as the dancing shoes of professional streetdancers and the characters are drawn in a very clichéd way. If you've ever seen any movie in your life, the outcome of the plot and its various strands will be clear to you very, very quickly. So if you're expecting something surprising and original, you're guaranteed to leave the cinema cursing rather than dancing happily. But if you are looking for a child-friendly dance fun, you will get some nice moments here.

So there are not only some nicely choreographed dance interludes, but also the one or other dream sequence to offer, which drive the entertainment value of the otherwise very ordinary little film noticeably up. The young actors do their job very well, whereas their adult colleagues act a bit too over the top - which isn't unusual for a children's movie, though. And subtlety is not exactly the strength of Streetdance Kids anyway. On the other hand, the 3D effects are convincing, but they are only used really well in the dance and dream sequences.

Objectively, Streetdance Kids is not a particularly good film in terms of quality. There is nothing that hasn't been seen before in numerous other films similar to this and mostly even better. Masses of clichés and many tired gags also don't contribute to the flick being award-worthy in any respect. Still, the film has to be granted that it serves its young target audience well, that the main characters are lovable sympathizers and that the visuals are absolutely convincing in most moments. So if the dancers from Streetdance were too old for you and if you want to see a brisk, entertaining and sometimes very fun children's dance film with a cool soundtrack, you can confidently overlook the obvious weaknesses and buy a movie ticket for Streetdance Kids. Worth seeing with reservations