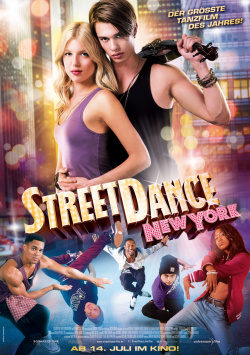 Ruby (Keenan Kampa) seems to have finally come close to her big goal: The classical ballet dancer has landed a place at the prestigious Manhattan Conservatory of the Arts. But as soon as she arrives in New York, she realizes that her training will not be a walk in the park. Modern dance is not her cup of tea, but she has to master it in order to get ahead at the school. She finds new courage when she meets the British violinist Johnnie (Nicholas Galitzine). His music and the dancing of his street dancer friends open up a whole new world to Ruby. But then Johnnie is picked up by the authorities and is to be deported because he doesn't have a valid green card. There is only one way out: if he accompanies Ruby on the violin in a dance competition at her school, he would receive a scholarship and a student visa if he wins. But the road to victory is lined with many obstacles, and the competition is enormous - and sneaky.

To put it bluntly: Streetdance: New York has nothing to do with the other street dance movies. The original name of the film is High Strung and it was renamed in Germany to attract fans of the British dance film series to the cinemas. It was directed by Michael Damian, who was briefly successful as a singer in the 80s and has been working as a director and screenwriter of shallow family entertainment like the horse movies Flicka 2 + 3 for a few years now. Shallow, then, is the right description for his dance flick, co-written with his wife Janeen Damian. The script is a pure collection of clichés, incredibly inane dialogue and one-dimensionally drawn characters. The story has no surprises to offer and borrows extremely brazenly from other representatives of the dance film genre.

Even worse than the script are the actors, who act in an extremely amateurish manner. There are scenes here that are so incredibly badly acted that you just can't believe it. It is also annoying that with Nicholas Galitzine an actor was chosen who obviously can't really play the violin, which then becomes obvious in an almost embarrassing way when he has a violin duel with an opponent who actually knows how to play this instrument.

Well, maybe I am too critical. Probably neither an interesting story nor good acting is expected from such a movie. First and foremost, I think it's about the dance scenes. If they really hit the spot, the rest won't matter anyway. Well, even if I personally don't see it that way, this view is unfortunately in line with reality - there's no other way to explain the success of some dance movies in recent years. So Streetdance: New York also has a trump card up its sleeve - which the film only plays to a limited extent, though. Yes, there are some nice dance sequences. One of them is even really good. But even though they are performed by real professionals, they seem astonishingly bumbling staged. Especially in direct comparison to the Step Up movies, the moves and choreographies shown here are nothing you would have to buy a movie ticket for. But since the dance scenes would be the only argument that could make the movie worth seeing for fans of this genre despite the bad actors and the flat script, the bottom line has to be that this is one of the weakest dance movies of the last years on all levels, whose makers have neither a clue about screenwriting nor about the thrilling staging of dance scenes. And that's why we give it only one: Even for fans only conditionally worth seeing!