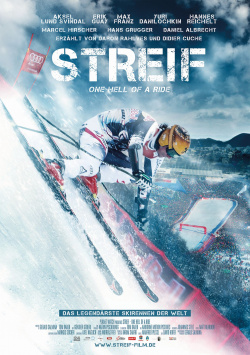 Streif - One Hell of a Ride

With a length of 3,312 metres and a maximum gradient of 85% at the infamous Mausefalle, the Streif, the ski race course on the Hahnenkamm in Kitzbühel, is one of the greatest challenges of all for ski racers from all over the world. And for the public, the Hahnenkamm race, which has been held here since 1937, is the highlight of every ski season. Nowhere else are triumph and defeat, joy and pain, jubilation and tragedy so close together as on this course. For the local audience the Hahnenkamm race is a big party, for the racers it is the ultimate adrenaline kick. Because time and again there are minor, but unfortunately also very serious accidents here, which have already brought great careers to an abrupt end. To mark the 75th anniversary of the race, Streif - One Hell of a Ride, a visually stunning film that observes the preparations of some athletes and organizers for the Hahnenkamm race over the course of a year, is now coming to cinemas.

Director Gerald Salmina (Mount St. Elias) not only offers a highly interesting look behind the scenes of the race and into the sometimes very unusual training methods of racers like Aksel Lund Svindal, Max Franz or Erik Guay. The film also fascinates with some breathtaking downhill scenes, great aerial shots and stirring slow motion footage. As a viewer, you get so carried away in some moments that you really feel the pain of the people involved, especially during the falls. And so it is no wonder that a montage of accidents is one of the most intense moments of the documentary.

The film also thrives on the strong contrast between the insights into the training and lives of the successful professionals and the significantly worse conditions under which up-and-coming athletes like Belarusian Yuri Danilochkin prepare for the race and then have to face their perfectly equipped competitors there. In this way, the documentary also takes a not entirely uncritical look at the mechanisms of professional sport, in which equality of opportunity is not necessarily guaranteed and success may well depend on the right sponsorship.

But first and foremost Streif - One Hell of a Ride lives from its images. Here, even as a non-expert of the racing scene and as a not necessarily enthusiastic ski fan, you will be captivated and entertained from the first to the last second. Only during the crucial sequence in the last act does Salima make a mistake that significantly diminishes the intensity of his images. To show the precision work that goes into a downhill run on the Streif, he juxtaposes images of the 2014 race with those of a balance artist who is thoroughly impressive in his own right. Over the course of several minutes, he repeatedly interrupts the spectacular downhill shots and cuts to the artist balancing with numerous poles. As the viewer quickly understands what the director wants to tell us with this comparison, this constant re-cutting has a slowing down and downright annoying effect. This destroys the big climax that the film works towards for over 100 minutes.

Besides that, Streif - One Hell of a Ride is a gripping, great and also extremely interesting documentary that is the perfect companion piece to the anniversary of the Hahnenkamm race. For this there is then - with minimal deductions - also a very clear: Absolutely worth seeing!

Cinema trailer for the movie "Streif - One Hell of a Ride (Österreich 2014)"
Loading the player ...