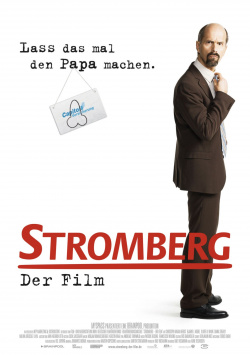 The wait is over, because finally the dad comes to the cinema! Bernd Stromberg (Christoph Maria Herbst), head of claims at CAPITOL Insurance, has driven his co-workers to the brink of insanity for five great seasons while entertaining viewers to the max. But now Stromberg takes it up a notch. When the whole office is looking forward to the upcoming company outing to CAPITOL's 50th anniversary party and Ernie (Bjarne I. Mädel) in particular is on top form with the preparations, Stromberg puts a serious damper on his employees. Under no circumstances will his department participate in such a celebration. But then Stromberg learns by chance that the closure of his CAPITOL branch is imminent. And so it is up to him to quickly get his sheep in the dry before the ship sinks for good. But he can only get a lucrative job at the company headquarters if he shows his best side at the anniversary celebration. So the department is unceremoniously loaded onto a bus and driven to the country hotel where CAPITOL is celebrating its 50th anniversary. As soon as they arrive, Stromberg realizes that his plan won't really work. For one thing, he simply can't hide from the board that he's not the model dad he thinks he is. On the other hand, Ernie, of all people, is pursuing the same plan as he is. But of course a Bernd Stromberg is not so easily dissuaded from his goal.

Fans and critics love the series Stromberg. Even though the comedy, based on the British format The Office, was never quite the big ratings draw, there has been speculation for some time that it would make the leap to the big screen. The success of a sold-out cinema tour at the start of the fifth season in particular encouraged the creators that Germany's worst boss definitely has the necessary fan base for a successful big screen appearance. What's more, a film would be the perfect way to bring the story of Bernd Stromberg, Ernie, Ulf and Tanja, Jennifer and all the other much-loved employees of CAPITOL Schadensregulierung to a worthy conclusion. But as always, the whole thing threatened to fail because of the dear money.

That's why the creators resorted to the possibility of crowdfunding. If they succeeded in raising the starting capital of 1 million euros with the help of the fans, then Stromberg - The Movie could actually become a reality. It was an experiment whose result exceeded all expectations: only one week after the call in December 2011, the financing was already secured and the production got the green light. Now, finally, the film is ready and sees the eagerly awaited light of the cinema halls. And of course the first question to ask is: is Stromberg - The Movie not only in the truest sense of the word a film by the fans, but also for the fans? And there is only one clear answer. Yes!

Stromberg mastermind Ralf Husmann and director Arne Feldhusen have really mastered the great responsibility of investing the fans' money in a perfect conclusion to the series. Not only does the film version take up all the popular aspects of the TV series, it also develops them coherently, leading to a finale that is as surprising as it is consistent and extremely funny at the same time. Of course, this is also true for the rest of the movie. Certainly, it was to be feared that the format of the barely 20-minute episodes couldn't be extended to a two-hour movie. But when you are released from the cinema after 123 minutes, you are really only surprised about how fast the time has passed and how much your face muscles and your diaphragm hurt from laughing so much.

The fact that the film works so well is not only due to the wonderful script, which comes up with countless great sayings and many little surprises. Also the fact that the actors have already grown into their roles over the years and have developed a perfect interaction, raises the entertainment value of this comedy significantly. Even if the whole ensemble can convince and the script is not only focused on Bernd Stromberg, it is of course still primarily Christoph Maria Herbst in his grandiosely performed parade role, who proves in every second that he is seen on the screen, that every penny invested in Stromberg - The Movie is perfectly invested!

From the amusing opening sequence to the closing credits, in which a few more familiar characters from the series who didn't make it into the film make a brief appearance, Stromberg - Der Film is a gift for the fans - and a really well-done comedy at that, with humor that is at times very direct and at other times extremely cryptic. A little bit of comedy, a little bit of satire, spiced with a good portion of sarcasm and bite - and two hours of best cinema entertainment are ready. Rarely has being embarrassed been so much fun! Therefore, if you found the series even slightly funny, you shouldn't miss this furious cinema finale! The whole thing is then filed under file U - Absolutely worth seeing!

Cinema trailer for the movie "Stromberg - The Movie (Deutschland 2013)"
Loading the player ...