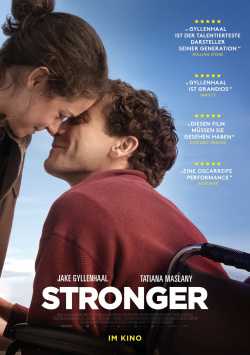 Jeff Bauman (Jake Gyllenhaal) and Erin (Tatiana Maslany) have not had an easy relationship. They were separated once again when Erin ran in the Boston Marathon in 2013 and Jeff decided to wait for his ex at the finish line in an attempt to win her heart back. But in just a few seconds, his life changes forever when a bomb explodes near him. The 27-year-old loses both legs in the devastating terrorist attack. As it is his testimony that provides crucial clues for the bombers to be caught, Jeff is quickly hailed as a hero by the media. But he himself has seemingly lost all hope of life. However, the unwavering support of Erin and his family see him through the lengthy rehab process. But whether he can overcome the dream of the attack is another matter.

Stronger is the second major Hollywood film, after Boston, to deal with the 2013 terrorist attack on the Boston Marathon. But unlike Peter Berg's drama, David Gordon Green's film focuses on the fate of one of the survivors, who must learn to live not only with the physical wounds the attack left on him, but also the psychological ones. The basis for the story is the book by the real Jeff Bauman, who in it candidly recounted his ordeal. After receiving a promise that the film would not be a slick, glossy Hollywood version of his story, Bauman signed the rights over to producer Todd Lieberman. With the help of acclaimed playwright John Pollo, who hails from the same area of New England as Bauman, and director David Gordon Green, the result is a gripping drama about one man's long, hard road back to life.

In Jake Gyllenhaal, they found a lead actor who really threw himself into the role with full commitment. Especially in small moments when Jeff is confronted with his fears, his frustration or his pain, Gyllenhall can convince all the way. No less important to making the story work, however, was the casting of Erin. With Tatiana Maslany, who might be known to series fans for her award-winning portrayal of several completely different roles in Orphan Black, the creators have shown a very good hand.

Stronger is really not your typical hero story. Jeff's relatives are truly not a model family and he himself has to deal with some demons even before the attack, which won't let him go even when he's being hailed as a hero by the whole country. It's a bit exhausting to watch at times, but is still absolutely worth it for the strong cast and some really powerful moments alone. If you appreciate rousing real-life dramas without too much pathos, you should definitely give this film a chance. Worth seeing