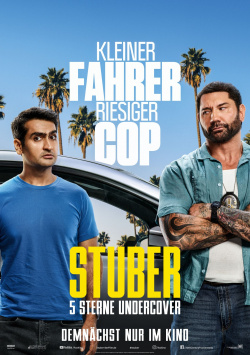 Such bad luck: On the very day that tough cop Vic Manning (Dave Bautista) is incapacitated by an eye exam, he gets clues to the whereabouts of drug lord Oka Tedjo (Iko Uwais), who has Vic's partner on his conscience. Unable to follow up on the clues without help, Vic is nearly blind for the next few hours. Without further ado, good-natured Uber driver Stu (Kumail Nanjiani), who was supposed to just take Vic to an art opening for his daughter (Natalie Morales), becomes a partner against his will. Whether Stu wants to or not he has to stand by the cop in the manhunt. But whether he is the right one for it, may be rightly doubted.

Stuber: 5 stars undercover should actually work perfectly. True, the idea of sending a half-blind muscleman on a manhunt with an unassuming dork is just another variation on the heavily worn buddy-cop genre. But this variation has a lot of comedic potential. Spiced up with some surprisingly bloody comedy action, this is actually stuff for a really enjoyable night at the movies. Well, there's just one little problem: For this to work, the script and the direction have to be right. And unfortunately, that's not the case here.

The script is a collection of rather tired gags. Tripper Clancy, who has already committed the unspeakable Schweiger/Schweighöfer slapstick Hot Dogs, is responsible for this. Director Michael Dowse (The F-Word, Goon) tries to make the weak corny jokes work by having his actors deliver them as loudly as possible. But even shouting out loud doesn't make weak gags any better. But - and this must be said to the honor of the film - but now and then there are a few really good laughs, so that you are at least quite solidly entertained.

In addition, the action is as said amazingly edgy. There's some real action here and there. So at least a few of the script weaknesses can be ironed out. But unfortunately not all. Stuber: 5 Stars Undercover is not really bad, but not really good either. It's neither a gripping action thriller, nor a really funny buddy-comedy. The movie has a little bit of everything but not enough of anything. And for that there can only be one conclusion: Only worth seeing with clear cutbacks!