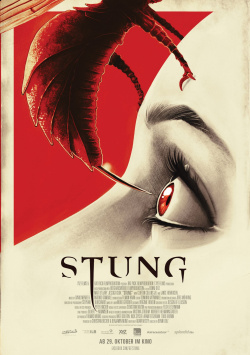 For Julia (Jessica Cook) there is a lot at stake: she wants to really take off with her small catering company. And that's why the party at the estate of the rich widow Perch (Eve Slatner) must also be a complete success. Her co-worker Paul (Matt O`Leary) doesn`t see it that way, but has vowed to be on his best behavior for his attractive boss. And indeed, the reception at the old estate seems to be a complete success. However, that changes abruptly when a swarm of giant wasps descends upon the guests. The critters are a nuisance as it is. But it only becomes really dangerous when they have stung someone. Because then they mutate into huge killer monsters, from which there is hardly an escape. A small group around Paul and Julia manages to escape into the house of the widow. But they soon discover that the killer wasps can't be stopped there either.

With his directorial debut Stung, Benni Dietz delivers old-school B-Creature horror. Shot at Schloss Börnicke, Bernau, Dietz sends his international cast on a trashy survival trip that has some practical effects worth watching and entertaining splatter moments. When the mutant wasps burst out of their victims, it's wonderful trash horror of the pleasantly old-fashioned kind. The fact that a lot of prosthetics or mechanical effects were used here, and not just computer effects (which are admittedly also used), gives the film a certain charm that makes up for the flat dialogue and the over-the-top acting of inherently accomplished actors like Clifton Collins Jr. or Lance Henricksen.

From the arrival of Julia and Paul at the estate to the big wasp attack on the estate, the film is really fun. You can feel the director's love for the genre. And also a touch of self-mockery lifts the entertainment value up again and again. After about 45 minutes the number of survivors is significantly reduced and the few who haven't fallen victim to the mutated wasps have to fight their way through the old mansion. Here, there are also some slightly longer dialogue sequences, which lack the irony that accompanied the movie until then. They are replaced by unintentional comedy, which only disappears in the wonderfully over-the-top finale. Dietz tries too hard to give his characters some depth and to build up real moments of suspense. At least he manages the latter quite well a few times. But all in all the film suffers in this section clearly from the lack of humor - and that is unfortunately deadly in a B-movie.

In total Stung thus remains behind its possibilities. But for friends of amusing B-movie horror, the work offers enough successful moments to guarantee a fun cinema visit. The film clearly benefits from the fact that someone was at work here who grew up with classic creature horror and wanted to pay tribute to the classics of this genre with a wink. If you're not expecting solid horror of the suspenseful and involving kind and just want to have some delightfully trashy fun, this is the movie for you. Worth seeing

Cinema trailer for the movie "Stung (Deutschland 2015)"
Loading the player ...