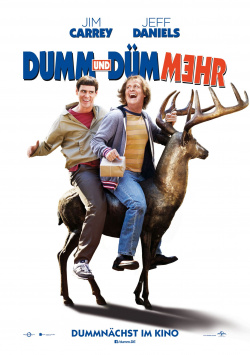 Twenty years have passed since Harry (Jeff Daniels) and Lloyd (Jim Carrey) had their tumultuous adventure, at the end of which Lloyd was rebuffed by the beautiful Holly. Traumatized by this event, Lloyd has been in a sort of waking coma ever since. But now it's high time to wake up, because Harry needs the help of his best friend. He urgently needs a new kidney. So the news comes just in time that Harry apparently has a daughter, the result of a long-ago fling with an old flame (Kathleen Turner). To find the girl, the two must travel across the country to a convention where the world's most brilliant minds gather - just the place for two dumbasses like Harry and Lloyd.

Nobody really wanted to believe that there would be another true sequel to the 1994 comedy hit Dumb and Dumber. Not least the fact that the unspeakable prequel and the animated series were not really blessed with great success, let the hope of the fans for a reunion with Harry and Lloyd dwindle from year to year. But just when no one was expecting it anymore, word spread like wildfire that Peter and Bobby Farrelly, along with original actors Jim Carrey and Jeff Daniels, would be directing a sequel to the slapstick after all, after two decades. The result is called Dumb and Dumber - and the name really says it all here. Because if you thought that the Farrelly brothers' humor had grown up a bit after twenty years or that Jeff Daniels would only play serious roles after his Emmy for The Newsroom, you're sorely mistaken.

In terms of infantile gags and crude sledgehammer humor, Dumb and Dumber is every bit as good as its popular predecessor. The Farrellys pick up right where they left off twenty years ago, and their two leads are not above the crudest slapstick. That said, the comedy doesn't necessarily seem designed for audiences unfamiliar with the original. It's true that the film works well for fans of slightly deeper humor even without prior knowledge of the first part. But numerous hidden or very obvious references to its predecessor make Dumb and Dumber More an especially great treat for those viewers who loved Dumb and Dumber.

Naturally, typical Farrelly humor is always a matter of taste. But whether you're deliciously amused by their gags or just find them insufferably embarrassing, you have to give them credit, especially in the case of Dumb and Dumber, for really doing their thing consistently. The film is so relentlessly silly, often politically incorrect and unrestrainedly crude that you often just can't help laughing heartily - even if you feel a tiny bit ashamed of it. Admittedly, some gags shoot a little too far beyond the boundaries of good taste or are just plain stupid. Other scenes, on the other hand, are downright brilliant or just so delightfully silly that it's funny again.

The second screen adventure of Harry and Lloyd will certainly not be able to achieve a similarly high cult character as the first part. There have simply been too many films in the last twenty years that have made use of very similar humour for that. While the gags in Dumb and Dumber were almost revolutionary in their crude way in 1994, they don't really offer much new in 2014. But fans won't mind, of course. For those who just want to see more of Harry and Lloyd in tried and tested form will get their money's worth with Dumm und Dümmehr. Therefore: Nothing for fine minds, but for all who liked the original, this long-awaited sequel is absolutely worth seeing!

Cinema trailer for the movie "Dumb and Dumber (USA 2014)"
Loading the player ...