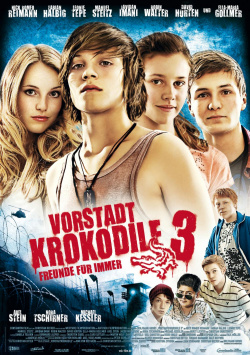 The "Suburban Crocodiles" are back! And in their third and final cinematic adventure, the friends must rise above themselves to save the life of a "Crocodile". Because in an accident on the karting track, Frank (David Hürten) is seriously injured and desperately needs an organ donation. Too bad the suburban crocodiles put the only possible donor, Frank's brother Dennis (Jacob Matschenz) behind bars on their first adventure and the prison warden refuses to let Dennis out of his supposedly escape-proof institution for even a second. But Hannes (Nick Romeo Reimann), who blames himself for Frank's accident, won't take it lying down. He hatches a plan to get Dennis out of jail. And so, for their last big adventure, the gang must go new, unconventional ways to save their friend...

Following the huge success of the first two "Vorstadtkrokodile" films, based on the bestselling young adult book by Max von Grün, Christian Ditter, director of the first two films, has come up with an exciting story to bring the trilogy to a dignified and enjoyable end for fans. This time, however, he has limited himself to the role of writer and producer, leaving the director's chair to Wolfgang Groos, who has attracted a lot of positive attention with his youth film "Hangtime".

No question, "Vorstadtkrokodile 3" is fully tailored to its target audience and will therefore primarily appeal to fans of the first films. Especially the last minutes make it clear that the film is made exactly for these fans. Therefore, a criticism would actually be superfluous. But in view of the many rather disappointing or even annoying youth films of recent years, it should be mentioned that this series positively stands out from the genre clutter. Because unlike unspeakable works like "Gangs" or "Die wilden Kerle 4" (I still haven't come to terms with this experience mentally), here you definitely have the feeling that the makers don't just want to pander to their target audience in order to pull pocket money out of their wallets, but that they definitely take their young audience seriously and even want to give them a few important messages along the way. However, this is not done with the pedagogically raised forefinger, but in an entertaining and just thereby effective way.

Naturally, the soundtrack and especially the sayings of Jorgo (Javidan Imani) are a bit strained cool and Nick Romeo Reimann with chic Justin Beaver hairstyle a bit too clearly designed as a heartbreaker for the little girls in the audience. But the bottom line is that the film has one thing that many other works in this genre lack: it has its heart in the right place. Especially the previously mentioned finale proves this in a very nice way. Therefore applies: certainly not the best part of the series, but for fans and young moviegoers absolutely worth seeing!