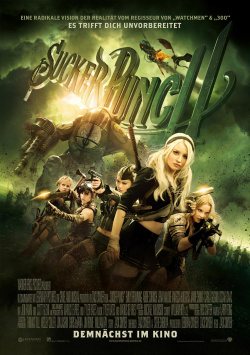 After the commercially rather disappointing attempt to apply his visual aesthetic to a children's film with the 3D animated film "The Legend of the Watchmen", "300" and "Watchmen" director Zack Snyder now turns his attention back to a slightly older audience with "Sucker Punch". The result is a visually stunning fantasy action epic that offers so much fodder for the eyes that there is unfortunately little left for the brain.

Young Babydoll (Emily Browning) is committed to a mental institution by her violent stepfather after the death of her mother. Trapped in a cruel reality, babydoll tries to break out of her despair with the help of her imagination. In her imagination, the asylum becomes a nightclub where she, along with the plucky Rocket (Jena Malone), her skeptical sister Sweet Pea (Abbie Cornish), the cunning Blondie (Vanessa Hudgens), and the daring Amber (Jamie Chung), are forced by their "protector" Blue (Oscar Isaac) to dance for the male patrons and be of service to them in horizontal ways as well. But Babydoll's dancing skills have a very special effect: while the men fall into a kind of trance, mesmerized by her moves, she manages to drift off into another reality where, with the help of a wise man (Scott Glenn) and the other girls, she is able to gather the tools that could help them Allen their way to freedom. But the closer they get to their goal, the more dangerous the mission becomes. Especially since, after all, all of this is taking place only in Babydoll's imagination - or maybe in reality?

Like "Inception" most recently, the action in "Sucker Punch" takes place on different levels of the imagination. But unlike Christopher Nolan's blockbuster, Snyder's film can't necessarily be described as intellect-stimulating head cinema. Here, there is no need to question things closely or even to try to understand them logically. Rather, the viewer should do exactly what the doctors want to do with Babydoll: simply turn off the brain. Because the action-fantasy film doesn't stand up to even the slightest questioning of logic. And that could result in "Sucker Punch" leaving the impression that one has just been allowed/had to experience the fetish fantasies of a filmmaker stuck in puberty. But that negative impression doesn't really do the film justice.

Whoever appreciates Snyder's very special visual aesthetic will be spoiled again in "Sucker Punch" to the best. Visually, the fantasy flick is beyond reproach. Snyder again uses deliberately exaggerated, artificial-looking special effects and slow-motion action sequences to entertain the viewer in the best possible way. And he seems to want to put on screen with all his might everything that fascinates him: there are zombie soldiers, dragons, robots, explosions, airships and cities on distant planets. And then, of course, there are the heroines, not exactly ugly, at least in the eye of the male viewer, who fight for their right to freedom and against male oppression in the skimpiest of outfits.

Influences from manga, video games, and fantasy films blend here into a whole that doesn't always seem homogeneous, but is held together by Snyder's obvious passion for the project and the engaging mix of mesmerizing imagery and a soundtrack that's at least partly great. It's clear that "Sucker Punch" is a project that Snyder shot primarily for himself. He contributed the idea for the story as well as a large portion of the script. He also served as an executive producer in addition to his directing duties, which allowed him to bring as much of his original vision to the screen as possible. The passion is definitely evident in the film, but not only in a positive way.

Because what is for some the picture-perfect (wet) dream of every nerd might seem to others like a pointless material battle of an extreme narcissist. No matter how you slice it, "Sucker Punch" can neither be lightly damned nor unconcernedly praised. Because as great as the action is staged, as worth seeing as the special effects and Snyder's typical visual language (which many critics and moviegoers have been bothered by since "300") combine, dramaturgically the whole thing can only convince to a very limited extent. The dialogues are inconsequential and the characters hardly fleshed out. Lead actress Emily Browning definitely expresses babydoll desperation in her face, but unfortunately this one facial expression remains throughout the film. Vanessa Hudgens ("High School Musical") and Jamie Chung ("Beautiful to Death") are nothing more than pretty staffage. And the otherwise always convincing Carla Gugino ("Sin City", "Watchmen") also has to give her one-dimensional character a terribly artificial accent. Only Abbie Cornish ("Candy - Journey of the Angels", "A Good Year") is allowed to show something like acting quality, which however threatens to get completely lost in the rush of images.

My personal tip: don't expect highbrow cinema. Sit back in your armchair and let the force of the images take effect on you without thinking much about the story and its logic. Who liked Snyder's previous films, will then also "Sucker Punch" enjoy and gets 109 minutes of what the Americans like to call "Eye Candy". But if you just can't help but ponder what's happening on screen, this "Sucker Punch" (which roughly translates as "unexpected punch") might completely knock you down intellectually!