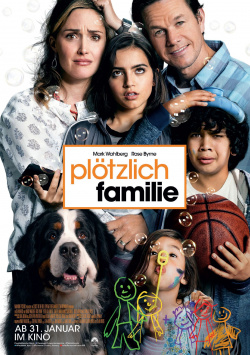 Pete (Mark Wahlberg) and Elli (Rose Byrne) enjoy their quiet, unexciting life. They don't need children to be happy. Or do they? When Elli thinks out loud one day about adoption, the decision is quickly made: The two want to become parents of a foster child. But suddenly they have not one, but three children on their hands - and one of them is already in his teens. So far, siblings Lizzy (Isabela Moner), Juan (Gustavo Quiroz) and Lita (Julianna Gamiz) have had little luck with foster parents. And since they assume it won't be any different for Pete and Elli, and Lizzy is sure they'll be allowed back to their birth mother soon anyway, their efforts to be true poster children are limited. Pete and Elli have quickly reached the brink of nervous breakdown - but they're not about to admit defeat that easily.

Yes, there are some badly overdone scenes here too, showing the chaos that children bring to a family. But thankfully, director Sean Anders largely eschews the extreme hit-and-miss humour that many other machinations with such a family theme employ. Instead, he repeatedly builds in wonderfully sharp-tongued dialogues, which are sometimes even really astute and not quite politically correct. Thus, the film generates really good laughs again and again, through which even the somewhat flatter moments make bearable.

In addition, the comedy can benefit from the fact that the characters with all their shortcomings are drawn really sympathetic. This starts with Pete and Elli, continues with the three kids, and doesn't stop with the numerous supporting characters. As a viewer, you're not quickly annoyed by these characters, but rather enjoy spending time with them. And when things get a bit maudlin, real emotions arise in the audience as well. Surely, this story inspired by true experiences of the director isn't really great cinema. The realization is simply too conventional for that. But for what the film wants to be, Suddenly Family is really successful. Entertaining and funny entertainment that also goes to the heart. Just the right thing for a relaxing visit to the cinema and therefore also: Absolutely worth seeing!