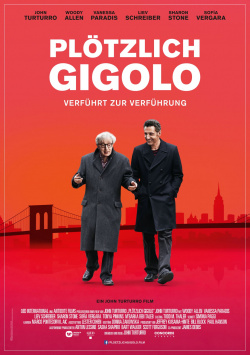 Necessity is the mother of invention. 77-year-old Murray (Woody Allen) realizes just how much truth there is in this adage when the impending closure of his bookstore gives him a crazy idea. After his dermatologist, Dr. Parker (Sharon Stone), mentions to him that she's looking for a man to have a M&eacute;nage &agrave; trois with her hot-blooded friend Selima (Sofia Vergara), Murray unceremoniously convinces his best friend Fioravante (John Turturro) to make the two women happy for a fee. Although Fioravante doesn't initially believe that a man with his looks would be accepted as a professional lover, he settles for an amorous test run with Dr. Parker. After she is more than taken with the florist's amorous skills and Murray realizes how easy it is to make money this way, he immediately sets out to find new potential clients for Fioravante. In the process, he meets young Avigal (Vanessa Paradis), the widow of a Hasidic rabbi. Out of curiosity, she allows herself to be persuaded to meet Murray's gigolo - a meeting that will not only change the young widow's life, but Fioravante's as well.

For his latest directorial effort, Suddenly Gigolo, John Turturro has enlisted the support of Woody Allen. And so it is no wonder that the film, especially in the first act, seems like a new work of the urban neurotic. Lively dialogues and a very funny initial situation lead to the conclusion that the film will be enjoyable arthouse fare of the relaxed kind. Woody Allen as an aging would-be pimp is just as funny as Fioravante's first attempts at seduction as a professional lover. And Sharon Stone, once again showing her sexy side as a love-struck dermatologist, and Modern Family sex bomb Sofia Vergara as love-struck Selima also support this first impression.

But then the tone of the film changes significantly with the appearance of Avigal. Here, Turturro delves into the world of the strictly devout Hasids, with the character of Dovi (Liev Schreiber) in particular, driven by his faith, the morals that come with it, and his jealousy, leaving an almost oppressive impression. The attempts to connect this world with the rather flippant humor of the beginning seem a bit clumsy and give the film a very inconsistent feel. No question, Vanessa Paradis and Liev Schreiber in particular play their roles very well. You can tell Avigal in her complete restraint, though, how much she longs to just be allowed to break out of her life for a change. In a romantic drama this story might have worked really well. But in a light-hearted comedy, some elements of this plotline, and especially the resolution, feel a little out of place and even a little depressing.

Suddenly Gigolo has some quite wonderful moments and Woody Allen is better than in many of his own films. But in the end, you're left with the feeling that John Turturro couldn't quite decide whether he wanted to direct a light comedy about a male hooker or a more serious drama about the clash of different beliefs and morals. The attempt to combine both unfortunately didn't succeed. Both parts of the story are well acted and well crafted, but in the end they don't add up to a coherent whole. And in the end this is only enough for a: with deductions just worth seeing!