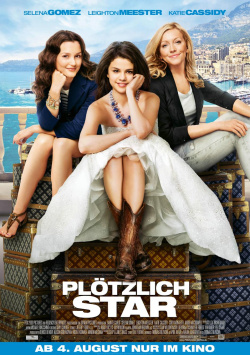 Feeling like a star is something Selena Gomez knows all about. After all, she's had great success as the lead of the TV series The Wizards of Waverly Place and as a singer. With the romantic comedy Suddenly Star, she now wants to make her big breakthrough in the cinema.

In the film directed by Thomas Bezucha (The Stone Family), Gomez plays young Grace Bennett, who wants to fulfill a big dream after her successful graduation and travel to Paris with her best friend Emma (Katie Cassidy). Too bad her mother (Andie MacDowell) and stepfather have decided that Meg (Leighton Meester), Grace's unloved stiff sister, is also going to Europe. Once there, the dream trip quickly turns out to be an absolute nightmare - until the girls discover that Grace looks exactly like British society girl Cordelia Winthrop Scott - a fact that leads to a turbulent mistaken identity adventure that whisks Grace, Meg and Emma away to a veritable fairytale world of luxury and romance. But of course, such a hoax doesn't go unnoticed for long.

There's no question that Suddenly Star is shallow, filled with clichés and flat characters. However, it's important to remember the target audience the film is aimed at. And girls between the ages of 11 and 15 should not care at all about the quite justified points of criticism. Because they get to see smart actors known from popular TV series such as Gossip Girl (Leighton Meester) or Glee (Cory Monteith), great clothes, romantic landscapes and gorgeous society dwellings, accompanied by a catchy soundtrack.

The story strictly follows the pattern of common mistaken identity comedies, but has some really nice moments to offer in the process, skillfully avoiding any form of emerging boredom. Sure, you probably only feel really entertained by this movie if you haven't passed your 20s yet. But thanks to the cute leading actress, the Monte Carlo captured in very nice pictures and the quite amusing story, Suddenly Star works surprisingly well despite all the clichés, lack of surprises and flat dialogues. Therefore, for all Selena Gomez fans and young viewer(s) who like movies like Suddenly Princess and What Girls Want, definitely recommended!