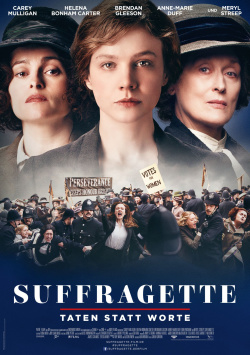 London in 1912: Since she was a little girl, Maud Watts (Carey Mulligan) has been working in the laundry of Taylor (Geoff Bell), who exploits his female employees wherever possible. But after work, Maud at least finds a little bit of happiness in her small flat in London's East End, where she lives with her husband Sonny (Ben Whishaw) and their young son George (Adam Michael Dodd). In her otherwise rather dull life this is a small spark of hope, which she doesn't want to put at risk. That's why she has so far stayed out of the suffragettes' fight for women's suffrage and fairer pay. But at some point Maud can no longer look away. Through her colleague Violet (Anne-Marie Duff) she becomes part of the group around the militant pharmacist Edith (Helena Bonham Carter), who wants to enforce her goals by force if necessary. These are goals for which Maud is even willing to go to prison. But the price she ends up paying is far higher than she bargained for.

It's actually surprising that it's taken this long for a film to be devoted to the suffragette movement, which emerged in Britain in the early 20th century in the wake of the fight for women's suffrage. Director Sarah Gavron and her screenwriter Abi Morgan tell of this dark chapter in British history from the perspective of a working class woman. With the help of Maud Watts, they show in Suffragette very vividly how important it was for women to fight for their rights on the one hand, but what was at stake for them as a result. Even though the character of the apothecary Edith - wonderfully played by Helena Bonham Carter - is an extremely interesting and important character for the story, the film would definitely not have been as powerful and convincing on an emotional level had the story been told from her point of view.

Because of what is at stake for Maud and what she has to fight for in the end besides her convictions, the story is given an additional emotionality, which Gavron has realized with a very sensitive hand. Anyway, her staging is more restrained overall, which has the effect of allowing the very purposefully used drastic moments to better develop their full intensity.

The actresses are all very good as well. Carey Mulligan's acting suffers only from the fact that she shows little real variation mimically. She always looks like she's about to start crying, even in the moments when she's actually happy. Mulligan has this look too often in other movies and in the long run it distracts from her very good performance. From Helena Bonham Carter and Anne-Marie Duff she is played here - at least as far as the facial expressions are concerned - easily to the wall.

But this is only a small point of criticism on an otherwise very good implementation of a rousing and also very important story. It's a film about strong women who fought for a lot more than just the right to vote - and it becomes clear that, in some ways, that fight is still being fought. Because justice still doesn't exist in too many areas. And that's exactly why this story is still extremely relevant, even though it's set over a hundred years ago. For lovers of stirring dramas and stories based on true events, this work is absolutely worth seeing!

Cinema trailer for the movie "Suffragette (Großbritannien 2015)"
Loading the player ...