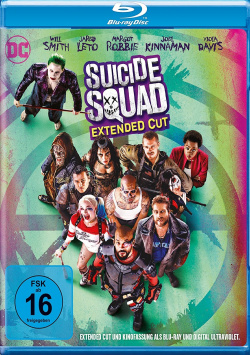 Film: Studio Warner Bros has a problem: they're sitting on a veritable goldmine with the rights to the characters from DC Comics, but - with the exception of the Batman films - somehow fail to adequately cash in on them. While the MARVEL films have become increasingly successful and acclaimed by audiences and critics alike, Bryan Singer's Superman Returns fell far short of expectations and Green Lantern proved to be a complete disaster in every way. Under the leadership of Zack Snyder, however, the DC Universe would eventually become a success story for the studio. Snyder's Man of Steel was a respectable commercial success, but could only satisfy fans to a limited extent. That's why they decided against a sequel and wanted to make the competition from Marvel look old with the duel of the giants Batman v. Superman. This film was also a financial success with almost 900 million dollars in box office takings, but not to the extent that had been hoped for. In addition, the flick was slammed by critics and many fans. At the latest now the responsible persons must have been clear that they must change something if the DC universe on the large screen is to survive in the long term and bring strong profits to the studio. And so they are now putting all their hopes in the anti-heroes of the Suicide Squad, who are supposed to offer fans what the previous DC adaptations have lacked: Lots of fun!

The film centers on a squad of supervillains, including hitman Deadshot (Will Smith), the utterly insane Harley Quinn (Margot Robbie), the explosive Diablo (Jay Hernandez), or even the hard-hitting thief Boomerang (Jai Courtney) and the vicious Killer Croc (Adewale Akinnuoye-Agbaje). Together, they are recruited by agent Amanda Waller (Viola Davis) to protect the world from the dangers that have threatened humanity since the appearance of the presumed-killed Superman. But of all things, the attempt to form an effective unit against potential enemies with superhuman abilities unleashes a threat of unimaginable proportions that cannot be defeated with conventional weapons. But thankfully, there is now the Suicide Squad! But will the villains with their very special abilities really put their lives on the line in the fight for good?

The first trailers for Suicide Squad were great. The marketing team really deserves a lot of credit here. The perfect interplay of cult songs, cool humour and action just made you want to watch the flick enormously and made you forget any possible annoyance about Batman v. Superman. Unfortunately, the movie can't quite live up to what the trailers promised. But first, let's look at the positives - and thankfully there are plenty of them. First of all, there's Will Smith, who finally gets to show off the coolness and charisma that made him a superstar once again. He's finally back as the action star who always has a casual quip on his lips and who does plenty of bad things, but at the same time gets to show his big heart, which is why you just can't stay mad at him as a viewer.

Despite this, Will Smith is not the star of the film. That honor clearly belongs to Margot Robbie, his female co-star from the gangster comedy Focus. The way Robbie brings comic book darling Harley Quinn to life here is just great. The mix of sexy, completely insane, funny and ice cold makes the Joker's mistress one of the best and most interesting characters in the entire DC Universe . It's when you realize that behind her crazy, cynical facade there's also a whole lot of sadness and longing for something completely different that this already fascinating character becomes even more interesting. And Margot Robbie manages to completely disappear into this character. She is Harley Quinn and with this terrific performance alone makes the movie worth watching.

However, this immediately leads to one of the film's weaknesses. Because next to Margot Robbie and Will Smith the other members of the Suicide Squad are almost degraded to marginal figures. You can tell this just by the fact that the sequences in which they are introduced get shorter and shorter. If Deadshot and Harley Quinn are still dedicated to several minutes, Captain Boomerang or Diablo are only very short scenes. And with Slipknot only a short mention is enough - which isn't that tragic, because two minutes later he isn't there anymore. And then there is of course the Joker, with whom a lot of publicity was made. So you might think that he is one of the main characters. Far from it: This popular villain only appears in a few short scenes. These are important for the story around Harley Quinn and for a possible sequel, but are rather secondary to the actual film.

That's something to get excited about. But on closer inspection, it may actually prove to be quite a clever move on the part of the creators. It was clear that any new Joker would be compared to Heath Ledger's Oscar-winning performance. Had the Joker been a major character, that comparison would have loomed over everything and dominated any coverage. This way, however, Jared Leto's completely differently drawn Joker could be established virtually incidentally and can then take on a bigger role in the next film without the oversized shadow of Ledger's legacy then settling over Leto's admittedly somewhat habit-forming performance.

Another weakness of the film is the big villain. It should no longer be a secret that this is Enchantress, played by Cara Delevingne. Although June Moore's initial transformation into Enchantress is really great execution, Delevingne simply lacks the talent to make the evil witch believably the threat that the members of the Suicide Squad are supposed to be dealing with here. Looking evil and fidgeting a bit just doesn't make for a good villain. That this part of the movie doesn't work isn't only because of Cara Delevingne, but also because of David Ayer's staging, which drifts too much into the mold and offers exactly what you get in almost every superhero movie by now. And that just gets boring in the long run.

All this prevents Suicide Squad from becoming the movie the DC movie universe so desperately needed right now. Nevertheless: The film offers a lot of fun, sometimes extremely good entertainment, a little bit of refreshing self-irony and cool mini appearances of Batman and another Justice League hero. If you don't expect a masterpiece and can put up with a few weaknesses, you'll definitely be entertained. And if, like me, you also liked Man of Steel and Batman v Superman despite all the justified criticism, you definitely shouldn't miss this first and definitely not last big screen appearance of the DC anti-heroes. Therefore. With minor reservations, absolutely worth seeing!

The Extended Cut: Unlike, say, Batman v Superman, the nearly 12-minute-longer Extended Cut of Suicide Squad fails to even begin to iron out the film's weaknesses. The additional scenes are sometimes quite nice to look at, but enrich the film only marginally. If you had problems with the theatrical version, you won't become a fan with the long version. However, if you like the shorter version, you'll get some really good additional moments here, which ensure that the Extended Cut is definitely the version to put in your player!

Image + Sound: The film's audiovisual conversion for the Blu-ray is convincing in almost every respect. The image has a pleasing depth and excellent detail sharpness. The atmospheric color mixing also supports the very positive overall impression, which is not disturbed by blurring or other weaknesses even in the darker moments. The powerful sound is present in an extremely vibrant Dolby Atmos mix (theatrical version) or a proper Dolby Digital 5.1 mix, which really lets it rip in almost every second with minor or major sound effects on all channels. What more could you want. Very good!

Conclusion: Whether in the theatrical version or as an extended cut, Suicide Squad is a step in the right direction, but suffers from the same problems that the other films in the recent DC universe have had to contend with. However, a convincing Will Smith and a great Margot Robbie at least console over some weaknesses and make these anti-heroes quite enjoyable comic book fun. The Blu-ray is technically on a good to very good level. The bonus material is worth watching, but could have been a bit more extensive. In the end, this is enough for a satisfied: recommendable!