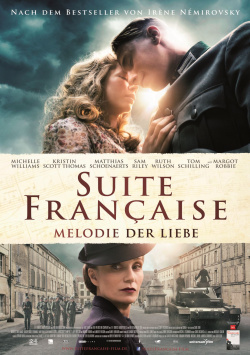 In the summer of 1940, war still seems far away in the small French town of Bussy. Lucile (Michelle Williams) fears the whims of her mother-in-law Madame Angellier (Kristin Scott Thomas) almost more than she fears the German occupiers. But when first a wave of refugees from Paris and shortly thereafter the Nazis arrive in Bussy, things change abruptly. Fear and oppression now dominate the hitherto harmonious everyday life of the inhabitants, who all have to accommodate German officers and soldiers. The charismatic officer Bruno von Falk (Matthias Schoenaerts) is quartered on the Angelliers' estate. Lucile initially meets the stranger with cold disgust. But when she hears him repeatedly playing a self-composed melody on her piano, she sees more in him than just the enemy occupier. Slowly, a tender friendship develops between the two that could become love. But then a young German officer is shot and the situation in the small town threatens to escalate.

It wasn't until 1996 that Denise Epstein realized that the supposed diary entries of her mother Ir&egrave;ne N&eacute;mirovsky, who died in Auschwitz, were actually parts of an unfinished novel. The first two parts of this fragment were then published in 2004 under the title Suite Fran&ccedil;aise. The book went on to become one of the most successful French novels of the last decade and also managed to storm the bestseller lists internationally. Director Saul Dibb (The Duchess) has now adapted the book and turned it into a good, but also very conventional mixture of war drama and love story.

Suite Fran&ccedil;aise - Melody of Love can boast a very strong, international cast. The fact that the French are primarily played by Brits, Americans or Australians and the German officer is actually Belgian is really only irritating when you watch the original English-language version. Otherwise, the very international cast stands out rather positively because of its quality. The same goes for the good set and the coherently chosen locations, which believably bring the fictional town of Bussy to life.

What the film lacks, however, is the very big emotionality that makes the book so special. The relationship between Lucile and Bruno could have used a little more depth, in order to be able to radiate the tragic power at the end, which is actually inherent in it. Despite the effortful acting of Michelle Williams and Matthias Schoenaerts, one key scene leaves you relatively cold, even though it would have been predestined to bring tears to the audience's eyes.

But other plot elements also feel a bit too superficial. They're all not bad, they're too well acted and too rousingly directed for that. But they seem a bit choppy overall and not fully developed, so that an emotional connection by the viewer is repeatedly prevented or just not fully achieved. The movie is still beautiful, touching and stirring. But it's also not very memorable and doesn't have a single moment that could make it stand out from the mass of similar war dramas. So if you're looking for big emotional cinema, you might be disappointed. But if you want to see a solid war drama with a great cast and a little bit of tragic romance, you won't go wrong here. Worth seeing