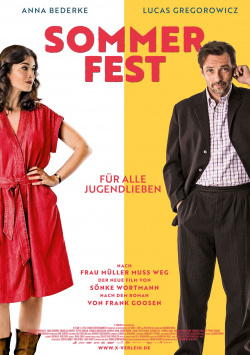 Ten years ago, Stefan (Lucas Gregorowicz) escaped his home in the Ruhrpott to make it as an actor in Munich. Now he returns to Bochum as a moderately successful theatre mime to bury his recently deceased father and put his affairs in order. After that, a TV role and hopefully his big breakthrough await him. Three days - Stefan doesn't want to stay in the pot any longer than that. But suddenly he's back in his old life, meeting old pals, friends, acquaintances - and also his great childhood sweetheart Charlie (Anna Bederke). Unlike Stefan, she has a very clear plan for her life. And also for Stefan's. But he wants to go back to Munich. Or does he?

The film adaptation of Frank Goosen's bestseller Sommerfest is a string of sometimes more, sometimes less entertaining episodes, which in the end result in a charming declaration of love for the Ruhr area. Director Sönke Wortmann has succeeded very well in capturing that very special feeling that arises when reuniting with friends and places from the past. The film is filled with a bittersweet nostalgia with the hope of a happy ending for the sympathetically drawn main characters.

The actors are very well chosen, with especially originals like Omma Änne (Elfriede Fey) being really wonderfully cast and exuding very authentic Ruhrpott charm. The dialogues are sometimes very funny, but at other points they seem a bit too forced and artificial to be convincing. By the way, this also applies to the individual storylines. There are some that are really quite nice and entertaining, while others seem a bit petty, too overdrawn and just not funny.

So Summerfest leaves me feeling a bit conflicted. When the whole thing works, it works really well. It makes you want to spend more time here with Stefan, Charlie and the others. The weak moments are fortunately in the minority, but they drag the entertainment value of the film down again and again noticeably. This is especially noticeable if you don't have a special affinity for the Ruhr area. Nevertheless: even with its clear weaknesses, Sommerfest is a nice film about missed and new chances, about great love and about personal roots that simply can't be cut off, no matter how far away you move. So overall still a deserved: worth seeing!

Cinema trailer for the movie "Summerfest (Deutschland 2017)"
Loading the player ...