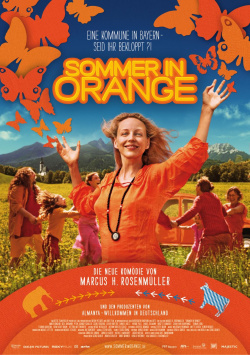 With films like Wer früher stirbt, ist länger tot, director Marcus H. Rosenmüller has established himself as a master of the modern Heimatfilm. Summer in Orange is once again set in the Bavarian province. But while films like Räuber Kneissel or Die Perlmutterfarbe had a rather hard time in the rest of Germany, Sommer in Orange should work just as well beyond the Weißwurst equator. Because the film is first and foremost one thing: damn funny and extremely endearingly staged.

The year is 1980. The passionate Bhagwan follower Amrita (Petra Schmidt-Schaller) moves with her children Lili (Amber Bongard) and Fabian (Béla Baumann) together with some like-minded people from a commune in Berlin to the picturesque village Talbichl in the deepest Bavarian province. With their rituals and their permissiveness, the sannyasins make few friends in the arch-conservative village. Especially the mayor (Heinz-Josef Braun) finds the newcomers a thorn in his side. It's bad enough that they disturb the Sunday service with their primal scream therapy or chant mantras half-naked in the garden. But when the enlightened ones also decide to build a therapy centre in the small village and thus attract even more of their kind, peace is gone for good. And Lili and Fabian have to suffer especially.

With Summer in Orange Marcus H. Rosenmüller has staged a culture-clash comedy of a very special kind. Rosenmüller knows perfectly how to create characters that are still endearing despite - or perhaps because of - their crankiness. Admittedly, he does expose some narrow-minded ways of thinking and attitudes to ridicule. But his characters never become silly caricatures, which is very good for the level of humor. Sure, some of the clichés played with here are already a bit worn out and therefore don't work quite as well anymore. But on balance, the clash of Bhagwan and brass band music works brilliantly as a starting point for some very amusing moments.

In addition to the well-cast adults, Rosenmüller has again managed to find very good child actors who don't act overly cool, but simply likeable and natural. When Lili protests against the far too anti-authoritarian upbringing of her mother and thus consciously opposes the commune, this not only has very funny consequences, but is also absolutely understandable thanks to the performance of Amber Bongard.

Although Summer in Orange doesn't quite match the wit and originality of Who Dies Earlier, Is Dead Longer, Marcus H. Rosenmüller has once again succeeded in making a biting and wonderfully quirky comedy that certainly offers a very special kind of enlightenment thanks to all the good laughs. And that is exactly what makes this film: well worth seeing!

Cinema trailer for the movie "Summer in Orange (Deutschland 2011)"
Loading the player ...