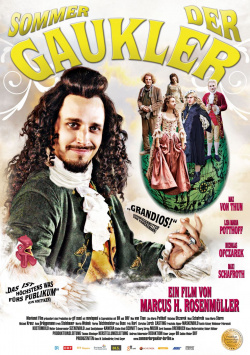 Summer of the Jugglers

Marcus H. Rosenmüller is undoubtedly one of Germany's busiest filmmakers. Having recently shown us Summer in Orange, he now takes us to Summer of the Jugglers, a blend of comedy, folk play, baroque theatrical drama and musical based on historical events.

In the summer of 1780, Emanuel Schikaneder's (Max von Thun) theater troupe gets stuck in a small mountain village near the Austrian border. Although Schikaneder lacks money, the right idea for a new play, and a permit to play in Salzburg, he always keeps up appearances and lives far beyond his means with his entourage, which his wife Eleonore (Lias Maria Potthoff) watches with concern. A dispute between the local miners and the miserly mine owner Paccoli (Erwin Steinhauer), in the course of which the simple worker Georg Vester (Maxi Schafroth) is involuntarily elevated to the position of leader of the resistance, and the secret love between Vester and Paccoli's daughter Babette (Anna Maria Sturm) provide Schikaneder with sufficient inspiration for a new play. But when events overturn and a rebellion ignites not only among the miners but also among Emanuel's troupe, the ensemble director must resort to a new ruse. An open-air performance, scheduled at short notice, is supposed to smooth the waters again, especially since no one less than Wolfgang Amadeus Mozart is supposed to appear as the guest of honour. But it seems doubtful whether this will really settle the turbulence.

Although Rosenmüller always remains true to his Bavarian homeland in his films, he cannot really be accused of one-sidedness. In the eight films he has released since his surprise hit Wer früher stirbt, ist länger tot, the filmmaker has displayed tremendous versatility, which continues in Sommer der Gaukler. With sometimes dry, sometimes a little cruder humor, a deliberately somewhat exaggerated play, which especially lead actor Max von Thun puts on the day, with some very surprising and somewhat quirky musical interludes and a coherent baroque set, the story of the legendary actor, theater director, poet and singer Emanuel Schikaneder can hardly be compared with any other film from the previous work of Rosenmüller.

He skillfully blends fact and fiction to create a film that pleases with good actors and some very nice ideas. But there is one shortcoming that detracts from the overall impression, which is quite positive in itself. Because somehow Summer of the Jugglers with its different plot levels and the multifaceted staging style seems a bit indecisive on the one hand, but on the other hand also overloaded. While some scenes work really well and offer great show and entertainment value, other moments come across as too overwrought and somewhat strained, which could sometimes put the nerves of the audience to a hard test.

What makes Summer of the Jugglers worth seeing is on the one hand the artistic versatility that the director displays here, but also the joy of playing of the coherently selected ensemble of actors and the mountain landscape captured in beautiful images. Nevertheless, the ambitious work is nowhere near as mass-compatible as the recent Summer in Orange, and will probably appeal to a small niche audience. But for those who appreciate historical cinema of a more quirky kind, Summer of the Jugglers could provide two enjoyable hours of cinema. Worth seeing

Cinema trailer for the movie "Summer of the Jugglers (Deutschland 2011)"
Loading the player ...