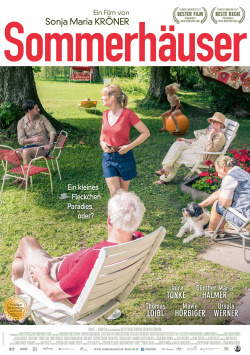 Summer 1976: After Grandma Sophie's funeral, the family meets in the communal garden outside Munich. The little idyll has been a meeting place on holidays or for family celebrations for years. But now the adults are arguing about whether the plot should be sold and who gets what share. The children, on the other hand, enjoy playing in the open air and exploring the mysterious neighbouring property. But news of a missing local girl, a plague of wasps and long simmering family disputes settle like dark clouds over the hot summer days.

The most positive thing that can be said about Sonja Maria Kröner's debut film Summer Houses is that the filmmaker succeeds very well in building a very individual and special atmosphere. On the one hand, it is clearly anchored in the 70s, but at the same time it seems very timeless. The ensemble really acts very well in this dense atmosphere. This creates some really authentic and stirring snapshots that really make you feel the oppressive heat of the sultry summer of 1976.

However, the film has some major problems that unfortunately get in the way of a positive overall impression. Basically, the whole thing is really nothing more than a series of snapshots. There is no real story being told. As a viewer, you are thrust into the lives of the protagonists and actually pulled out again without any resolution or redemption. And in between, you have to watch scenes of what feels like minutes of sweeping the porch or setting the coffee table.

Additionally, the people you spend your time with here are not the great likable ones. And spending money to watch a bunch of people you can't form any kind of emotional bond with argue or do mundane housework isn't really something I can recommend in good conscience. Sure, there are certainly some lovers of German auteur cinema who will be enthralled by this somewhat different family portrait simply because of the strong acting of the actors or the charged atmosphere. But those who go to the cinema to be well entertained are absolutely wrong here, despite the positive aspects. And that's why, on balance, there is only one: Worth seeing with reservations!