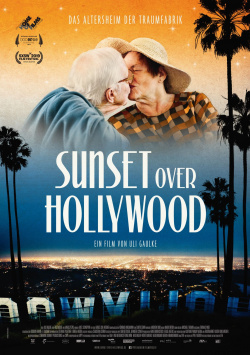 Hollywood - The dream factory, a place of the rich and beautiful, where being young is the absolute ideal. But even with plastic surgery helping out where it can, even the people of Hollywood eventually grow old and frail. For them, a very special retirement home was founded many years ago. Here, tucked away at the end of legendary Mullholland Drive, actresses, screenwriters, directors, producers, cinematographers and other creative minds of the film industry spend their twilight years. Even though the people here have to deal with the very everyday problems of old age, there is still a proper whiff of Hollywood wafting through this special place.

In their amusing but also very emotional documentary Sunset over Hollywood, Uli Gaulke and Agnes Lisa Wegner take a stirring look at this extraordinary microcosm. The film portrays some of the residents of the retirement home in a very charming way and impressively shows that these creative minds of the dream factory do not only lose themselves in memories of the good old days, but also pursue their love of cinema in old age wherever they can. That's where they get together for creative writing and develop script ideas or plan the production of a new film.

That there are still some inflated egos even in Hollywood's retirement home makes for some very amusing moments here and there. However, the directing duo perfectly avoids making fun of the protagonists. Rather, they are portrayed in a very sensitive and endearing way, which greatly enhances the entertainment value of this documentary. Sunset over Hollywood is a love letter to old Hollywood, but also a film about people who have enchanted millions of viewers with their work. These people, who so often take a back seat and are just names in the credits, are finally given the spotlight here.

It also makes clear that creativity can't just be shoved into the siding. So it's all the nicer that there's a place for these people to do all the things they loved in their active days, even in the last phase of their lives. A really nice, entertaining film that can be warmly recommended especially to documentary fans who love classic Hollywood cinema. Absolutely worth seeing!

Cinema trailer for the movie "Sunset over Hollywood (Deutschland 2019)"
Loading the player ...