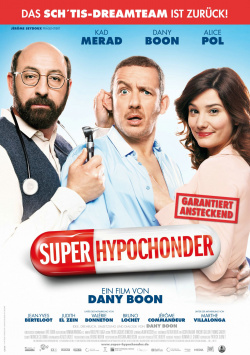 Romain Faubert (Dany Boon) is a hypochondriac of the worst kind. He sees dangers to his health everywhere, every little twinge is a sign of a deadly disease, and his fellow humans are merely breeding grounds for any number of nasty germs. The neurotic Romain regularly complains about his suffering to his doctor Dr. Dimitri Zvenka (Kad Merad), who is also his only real friend. But Dimitri is not at all thrilled about Romain turning his life upside down again and again. When it comes to a real catastrophe and Dimitri's wife Norah (Judith El Zein) slowly loses patience with her good-natured husband, he hatches a supposedly ingenious plan: Romain should finally find the great love and thereby lose his fear of life. But the first dating attempts go wrong, of course. Shortly before Dimitri wants to give up for good, he resorts to a last, desperate measure: a shock therapy is supposed to be the last attempt to help the super hypochondriac. And so the doctor takes him on a relief mission - with unexpected consequences: Suddenly Romain is mistaken for the revolutionary leader of the small banana republic of Cherkistan. And of course this can only end in a tangible chaos.

The great success of Welcome to the Sh`tis has certainly opened many doors for leading actor and director Dany Boon. However, it has also meant that all of Boon's subsequent work will inevitably be compared to his surprise hit - especially when he stars again with his Sh`ti co-star Kad Merad. By no stretch of the imagination can Super Hypochondriac stand up to this imposing comparison. Admittedly, this comedy also has some very amusing moments and a wonderfully absurd initial idea to offer. But Boon relies much more heavily here on over-the-top facial gymnastics and goofy clowning, losing the very thing that made The Sh`tis so successful: its heartwarming charm.

To say The Sh`tis was a prime example of subtle, witty wit is false, to be sure. But the film's humor, even in its scenes dominated by clunkiness, was always charming and the characters, despite their quirkiness, absolutely endearing. And that's just not the case with the super-hypochondriac. Because with his neuroses he quickly gets on the nerves not only of Dimitri but also of the audience. And the exaggerated grimacing of Dany Boon is also only funny to a limited extent. Now, one could argue that overplayed facial expressions have a certain tradition in French comedy. Louis de Funes comes to mind. That may be true, but Dany Boon, with all due respect for his talent, is simply no Louis de Funes. And even he couldn't save a movie with his grimaces if the rest wasn't right.

Not to say that Super Hypochondriac is a complete failure. There are just too many successful ideas and good laughs for that. Alone the fact that the film takes a completely different direction after about 45 minutes than you would expect from the initial situation or the trailers, must be credited to the comedy. It's just a pity that the many good approaches too often degenerate into pure clowning and silliness and thus lose much of their originally recognizable appeal. Certainly, no cerebral restraint should be expected from a turbulent comedy of mistaken identity such as this. But even a turbulent story with plenty of slapstick doesn't necessarily have to turn all the dials up full blast to generate hearty laughs from the audience.

If you're simply in the mood for French slapstick, you can't really go wrong here. Dany Boon and Kad Merad, even in weaker moments, are just an unbeatable team to laugh at again and again. And the story is so wonderfully absurd at times that it's just fun. But if you expect a charm offensive in the style of the Sh`tis - with which the film offensively advertises - and if Boon's grimaces from the trailer are already too much for you, you should rather take a sick note before going to the cinema. Therefore: overall only with cutbacks worth seeing!