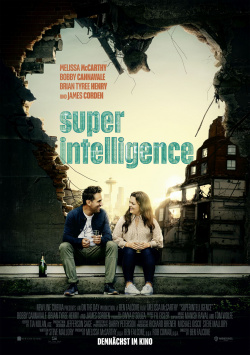 Carol Peters (Melissa McCarthy) is a perfectly unremarkable average person. Nothing really exciting has happened in her life so far - until a superintelligence chooses her as a research subject and takes control of her electronic devices in the form of talk show host James Corden. This is irritating at first, but it also brings about some thoroughly positive changes in Carol's life. But when she learns that she is the last hope for humanity, Carol must find a way to pull the plug on the dangerous AI...

"Superintelligence" is Ben Falcone's fifth directorial effort, now starring his spouse Melissa McCarthy. And it has to be said that after humorous pipe dreams like "Thunder Force" or "How to Party with Mom", it has become the couple's funniest and also most charming collaboration to date. Sure, there are the typical McCarthy gags here again, which just don't want to spark after what feels like countless comedies from the actress. That was in "Brautalarm" perhaps still quite funny and in "Spy: Susan Cooper undercover" also. But precisely because McCarthy is actually capable of so much more, it's a shame that her acting keeps hitting the same humor notch.

Despite that: "Superintelligence" has some good gags and nice touches, and also benefits from good - and believable - chemistry between the lead and her co-star Bobby Cannavale. As a result, the film is thoroughly enjoyable for long stretches - even if so much more could have been made of the AI theme. Falcone misses the opportunity to inject some depth into the story here, alongside flat gags. Because the idea - even if it's not new (there was already a similarly themed "Simpsons" episode) - is really good and offers a lot of potential. Unfortunately, this is not used enough.

So "Superintelligence" is quite nice, but also irrelevant cinema fun, which can be recommended especially to fans of Melissa McCarthy. If you don't expect more than a few good gags and over-the-top slapstick, you'll get your money's worth. And for it there is then also - with small deductions - still a restrained, but neat: Worth seeing!

Cinema trailer for the movie "Superintelligence (USA 2020)"
Loading the player ...