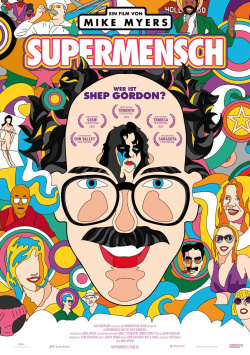 Supermensch - Who is Shep Gordon?

It's a success story that really only the dream factory can write: At just 21 years old, Shep Gordon's penchant for mind-altering drugs introduced him to musicians Janis Joplin and Jimi Hendrix, who introduced him to rocker Alice Cooper. The two men had chemistry from the start, and Gordon became Cooper's manager. Through clever promotions, Gordon made Cooper a star and over the next forty years became one of the most popular and well-known figures in American show business. He managed numerous music stars, successfully dabbled in the movie business, and laid the groundwork for the popularity of television chefs like Anthony Bourdin. Shep Gordon knows how to make his clients happy, but also how to deal with paparazzi or difficult promoters. But who actually is this Shep Gordon, whom actually every American superstar knows, but whom you as a normal mortal have never heard of. Actor and comedian Mike Myers, who met Gordon on the set of Wayen`s World, introduces us to this very special manager in his directorial debut, Supermensch - Who Is Shep Gordon?"

With the help of numerous interviews with Gordon himself and stars such as Alice Cooper, Michael Douglas, Sylvester Stallone and himself, Meyers traces an extremely exciting career of a fascinating man who left a lasting mark on show business from behind the scenes. One learns what Gordon did for the American independent film, for the reputation of colored musicians or for the extremely popular TV genre of cooking shows. With which ideas he brought his stars into the headlines and how he ingeniously knows how to use the sensationalism of paparazzi for his own purposes. Meyers introduces his viewers to Shep Gordon, the brilliant storyteller, as well as Shep Gordon, the shrewd businessman, and Shep Gordon, the warm-hearted human being who, however, can also be an extremely cold dog at crucial moments.

The life portrayed here is more like that of a superstar than that of a manager. Drugs, women, scandals - Shep Gordon left nothing out, yet was always there for his clients. This, of course, had an impact on his personal life. Today, at over 60, Gordon would like to have a family of his own with a wife and children. At least since a life-threatening surgery in early 2012, he has been thinking about his unfulfilled desire to have children and who he should leave all his wealth to. But Shep Gordon wouldn't be Shep Gordon if he didn't comment humorously on that, too, grinning at the camera and saying that, yes, he still has a few years to let off steam before he really has to settle down.

Mike Myers does a very good job of portraying this interesting man with all his facets. At times this is extremely amusing, but at other times it takes time for quieter moments of serious self-reflection. The stories that are told make the film extremely entertaining, especially for viewers who are interested in the American show circus. For example, you learn why a chicken is partly responsible for Alice Cooper's image, or that an experience Gordon had with Alice Cooper and a very young up-and-coming journalist named Cameron Crowe inspired a key scene from the latter's later film Almost Famous. All of which makes this film about the ultimate manager an exciting, interesting, surprising, funny and extremely entertaining treat - even if you've never heard of Shep Gordon before. For this there is a very clear: Absolutely worth seeing!

Cinema trailer for the movie "Supermensch - Who is Shep Gordon? (USA 2013)"
Loading the player ...