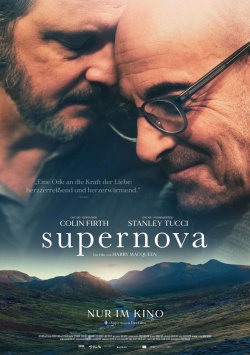 For twenty years now, Sam (Colin Firth) and Tusker (Stanley Tucci) have lived together as a couple and their love is still as strong as it was on the first day. But their time together is coming to an end as Tusker, the famous pianist, suffers from dementia. The two men want to enjoy the time they have left before the disease completely takes over Tusker's memory - as much as they can. They travel the country in an old camper van, visiting friends and family and savouring every second together. But for far too long, what's next for them remains unspoken - and soon their completely different ideas collide, putting their love to one last hard test...

True love also means being able to let go. But how are you supposed to let go of someone your heart is so attached to. How to let him go before it is actually time? With his very quietly told love story "Supernova" Harry Macqueen shows how difficult it is to say goodbye to a loved one whom an illness is slowly but inexorably destroying. It also highlights issues such as self-determination and acceptance of the inevitable. Doesn't really sound like light, feel-good cinema now, does it? It isn't. Nevertheless: the heaviness of the story is counterbalanced by a very sensitive production, carried by two great leading actors.

Stanley Tucci is simply wonderful as the star pianist, who loses more and more precious memories, but always tries to keep up a dignified appearance. At his side, Colin Firth acts like a rock, but threatens to be swept away by the tumultuous force of his beloved partner's illness. Set in wonderful landscape shots, the two have conversations that are at times a bit melancholy, but at other times laced with subtle humor, always making palpable how great their feelings for each other are.

What the film does very well is that it doesn't particularly address the fact that the two lovers are two men. That's beside the point. The only thing that matters is that they love each other sincerely and unconditionally - and that's exactly how it should be. Because by putting the love between two people in the foreground, the final act can unfold its full power. It's enormously emotional and sad - and yet it doesn't leave you completely frustrated, because you were able to witness how happy Sam and Tusker were together. In short, thanks to the sensitive staging and the two great lead actors, "Supernova", despite its difficult and melancholy subject matter, has become a touching and truly beautiful film that is absolutely worth watching if you are willing to deal with death and letting go of loved ones.

Cinema trailer for the movie "Supernova (Großbritannien 2020)"
Loading the player ...