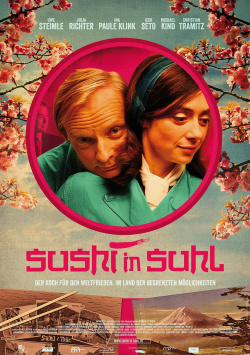 Rolf Anschütz (Uwe Steimle) is a cook with a passion. With the little means at his disposal, he tries to offer his guests something surprising every now and then in his restaurant Waffenschmied in the small town of Suhl in the GDR in the early 1970s. But neither his guests nor the regime want any great experiments. They want Anschütz to use his talent on regional specialities. But Rolf has higher ambitions. Inspired by a book about the cuisines of the world, he decides to host a Japanese evening for a small group. The evening is such a success that word gets around that one day a Japanese man currently living in Leipzig actually stands in front of the restaurant and asks to dine Japanese food at the Waffenschmied. A friendship based on mutual respect quickly develops between the two men, inspiring Rolf to become a real expert on Japan. What is initially a thorn in the party's side is soon tolerated as the restaurant becomes more and more successful, raising not only money but also prestige. But such success does not come without a price, of course...

Sushi in Suhl is based on the true events surrounding restaurateur Rolf Anschütz and his restaurant, which has become famous as far away as Japan. Carsten Fiebeler has conjured up a very endearing mixture of comedy and drama out of the story, which is as interesting as it is crazy, and which scores points especially in the first half with a lot of bizarre wit, a wonderful wealth of detail and likeable actors. In addition to the perfectly chosen leading man Uwe Steimle, especially Ina Paule Klink as the enchanting geisha Giesela, Gen Seto as Dr. Hayashi and Deborah Kaufmann as the ice-cold HO director Elke Malaschke deliver more than convincing performances.

It is almost impossible not to be captivated by the charm of the first hour. The viewer is literally swept up in a feel-good wave here that rarely leaves you with quite big laughs, but often leaves you with quite big smiles. If this feeling could have been maintained until the end, Sushi in Suhl would have had what it takes to become one of the most beautiful German films of the year. But unfortunately the story loses its lightness as soon as Armsmith reaches the peak of its success. Not only that here the in itself very loving relationship between Rolf and his wife Ingrid is broken. Also his visit to Japan is rather filled with a certain dreariness, through which also the events at the beginning of the story are somewhat disenchanted.

Surely, Fiebeler just keeps to the real background even with all dramaturgical liberties he has allowed himself. And there just wasn't everything as rosy and fairytale-like as one might believe at the beginning. It would also be wrong to say that the last third of the movie wasn't successful. It might be a bit too long, but it's neither badly acted nor badly directed. Rather, it's that the discrepancy with the wonderful and endearing beginning is too drastic to really see the quality of the conclusion. One is simply disappointed that this engaging feel-good feeling doesn't last until the end.

However, even if Sushi in Suhl ends up not being quite the film it seems to be at the beginning, the bottom line is that Carsten Fiebeler has succeeded in making a very nice, at times delightfully funny and refreshingly unconventional film that tells an unbelievable but true story carried by a very charming ensemble of actors. The fact that the whole thing falls off towards the end can be forgiven. Worth seeing

Cinema trailer for the movie "Sushi in Suhl (Deutschland 2012)"
Loading the player ...