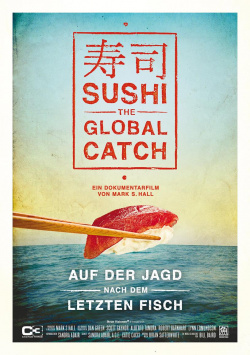 For years, sushi has been enjoying an unparalleled triumph all over the world. Everywhere, the rice bites, usually filled or topped with raw fish, are enjoying such popularity that there are now numerous variations offered in countless sushi restaurants. In Japan, the home of sushi, where the dish was once offered by street vendors before finding its way into restaurants, the preparation of really good sushi is still a fine art. It takes years for a sushi chef to complete his training from cooking rice to preparing the bites in front of diners. With its growing popularity, the business of sushi is also taking on all kinds of curious forms. For example, there is a sushi to go snack bar in Texas, a New Yorker has invented sushi-on-a-stick, and in many supermarkets ready-to-eat sushi can be purchased straight from the refrigerated section.

The documentary Sushi - The Global Catch not only shows the viewer the tradition of sushi preparation, while also offering a brief excursion into the history of the delicacy, it also explains what problems the ever-growing popularity of the morsels brings with it. Arguably the biggest of these problems is the overfishing of the oceans and the resulting extinction of bluefin tuna in particular, which in turn can have disastrous effects on the entire eco-system. But director Mark S. Hall is not launching a war campaign against eating sushi here. Rather, he makes clear different positions, establishes the problems that seem to be completely ignored by the governments of Japan and the U.S., and thereby calls on consumers to be more conscious of what and how much they eat.

For Mamoru Sugiyama, whose restaurant SUSHIKO has been in his family since 1884, not only the preparation but also the worship of sushi is something to be celebrated. An important factor in this is time. Time allows for the cultivation of a tradition that is in danger of being completely lost in an age of industrial sushi production and mass diners. Of course, the consumer also forgets to appreciate the work and care that goes into the production of the popular appetizers and instead of really enjoying them, people like to fill their stomachs with the delicacies. Here a rethinking must take place, because even small changes in consumer behavior could have a positive effect on the threatening situation.

What makes this documentary so interesting and worth watching is that Mark S. Hall lets his protagonists represent their points of view without commenting on them in a judgmental way. As a viewer, you can decide for yourself whether you share the views of, say, Mike Sutton on his interpretation of sustainability in relation to fishing for endangered tuna species, whether you are more willing to try the alternatives to endangered fish species suggested by Greenpeace activist Casson Trenor, or whether you want to resort to captive-bred tuna, such as that of Australian Hagen Stehr. With stunning images of the Tsukiji fish market in Tokyo, the largest fish market in the world, and fascinating footage of traditional sushi preparation, Sushi - The Global Catch is not just a warning, an indictment, but also a nod to an extremely tasty tradition. A documentary worth seeing and also important, which should not be missed by sushi lovers in particular. It won't spoil your appetite either, but you will definitely consume your next sushi with a completely different and perhaps more intense awareness. Worth seeing!!