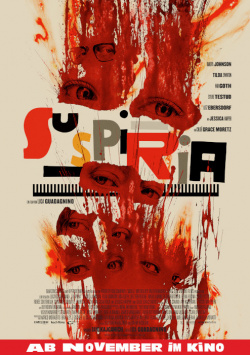 The young American Susie Bannion (Dakota Johnson) travels to Berlin in 1977 to be recorded with the renowned Markos Tanzensemble. She's lucky: As ensemble member Patricia (Chloë Grace Moretz) has just disappeared under mysterious circumstances, a place has become available for Susie to take. Quickly she develops an enormous talent under the director Madame Blanc (Tilda Swinton) and befriends the young dancer Sara (Mia Goth). Everything seems to be going wonderfully. But the young woman notices that something is wrong here. Also Patricia's psychotherapist Dr. Josef Klemperer is on the trail of the secret of the dance school - not knowing what demonic forces behind the façade of the prestigious school are preparing a bloody ceremony…

After the critic's favourite "Call me by you name", director Luca Guadagnino dares to tackle a completely different subject: a remake of Dario Argento's horror classic "Suspiria". Guadagnino was obviously aware that he wouldn't be able to achieve the special effect of the original in a direct remake, especially since Argento's film was also a product of his time in many ways. That's why he reinterpreted the story in his own way and also reinterpreted it stylistically. The result is a work that, while striving for similar motifs, interprets them in completely different ways.

This new adaptation pays tribute to Argento's work again and again, only without copying it. Now the question arises: does the whole thing work? Unfortunately, there is no clear answer to this question. Atmospherically, Guadagnino's "Suspiria" is great. Visually the stripe is fascinating and disturbing, sensual and repulsive at the same time. It is difficult to turn away the eyes, be it when the dancers move beguilingly in bizarre choreographies or when unexpectedly coarse bloodshed occurs. The movie exudes a very unpleasant gut feeling, but at the same time it captures you extremely.

Dramaturgically the whole thing is less convincing. Not only was the story unnecessarily inflated to two and a half hours. At times it is also told unnecessarily confusingly, so that the viewer has to decide whether to simply give in to helplessness or to boredom. A somewhat tighter and less excessive production would have been advantageous here.

"Suspiria" has all the prerequisites for a real masterpiece, but these are not adequately used to create such a masterpiece. Nevertheless, it is an interesting, even though exhausting cinematic experience for all lovers of obscure horror movies. And for that there is also a good conscience: Worth seeing.

Another little tip: If the actor of Dr. Josef Klemperer looks familiar to you, just take a closer look, maybe someone else is hiding behind the mask than the credits want us to believe.

Cinema trailer for the movie "Suspiria (USA/Italien 2018)"
Loading the player ...