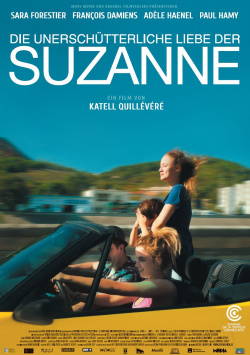 The Unwavering Love of Suzanne

Although his wife passed away at a very young age and he has few financial resources, truck driver Nicolas (Fran&ccedil;ois Damiens) manages quite well to give his two daughters Suzanne (Sara Forestier) and Maria (Ad&egrave;le Haenel) a happy childhood. The two girls stick together tightly, come what may. But the trio's family happiness is nowhere near as unshakeable as it sometimes seems. This becomes apparent when rebellious teenage girl Suzanne announces that she is pregnant. Nicolas can't hide his disappointment, but still sticks by his daughter and helps raise his little grandson Charly. But the cracks created by Suzanne's early pregnancy in the relationship of trust with her father and sister deepen for good when she meets and falls madly in love with the shady Julien (Paul Hamy). Blinded by this unwavering love, Suzanne makes decisions that will permanently change not only her life, but her son's as well.

In The Unwavering Love of Suzanne, director Katell Quill&eacute;v&eacute;r&eacute; follows the life of her protagonist over a period of twenty-five years. In brief glimpses of important phases in Suzanne's life, this blends an almost documentary-like realism with distinctly fictional elements. Due to the fact that mostly very unexciting moments are interrupted by sudden jumps in time, sometimes of several years, there is no stringent plot in the conventional sense. Much of what happens to Suzanne, her sister, and her father in the time that the film skips over is either not conveyed at all or is conveyed only in a rudimentary way, even when it has crucial importance to the development of the characters. Quill&eacute;v&eacute;r&eacute; thereby aims to make the viewer an active participant in the story, who should also fill in the gaps created by the abrupt cuts by reminiscing about their own youth.

In addition, the upheavals in Suzanne's life are to be made even more intensely clear by the omissions of certain scenes. On the one hand, this may work very well. On the other hand, such a narrative style makes it very difficult for the viewer to form a real bond with the characters. Moreover, Suzanne isn't necessarily a really sympathetic character in her rebellious phase and later on because of the bad decisions she makes. All this makes the film a very unwieldy challenge that will probably only be taken up by viewers who have a soft spot for French arthouse cinema of the challenging kind.

They will then, however, certainly succeed in discovering the engaging verisimilitude that distinguishes this film. This can be felt not only in the sensitive staging, occasionally spiced with quiet humour, but also in the very good acting of Sara Forestier. Forestier in particular manages very well to lend an intensity to the sometimes somewhat too worn narrative flow, which, provided one has become involved in the patchwork-like story, knows how to convincingly captivate. The steadfast love of Suzanne is truly not a film for a mass audience, no light fare to escape relaxed from everyday life. But if you appreciate honest, true-to-life and excellently acted drama fare and love young French arthouse cinema, you shouldn't miss this film. Worth seeing

Cinema trailer for the movie "The Unwavering Love of Suzanne (Frankreich 2013)"
Loading the player ...