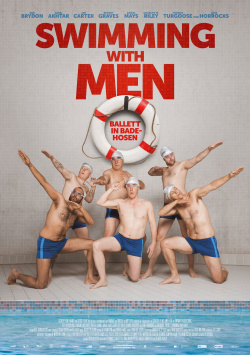 Eric (Rob Brydon) has a problem. It's called a midlife crisis! While his wife Heather (Jane Horrocks) rises to become a sought-after and busy local politician, he is trapped in the monotony of his accountant's job. His relationship with his son is also cooling and he can't seem to get excited about anything. This changes when one evening during his usual visit to the swimming pool he observes a group of men trying their hand at synchronised swimming. The motley crew is not really good, but they seem to have fun. Quickly Eric becomes part of the group, which not only gets better with each meet, but also gives Eric the courage to allow changes in his life. The only question is whether it's too late for his marriage by then.

Whole or nothing in a swimming pool - that, or something like it, might be the best way to describe the wonderfully charming comedy Swimming with Men. A group of men get together to swim against the apparent futility of their everyday lives - gracefully and synchronously, of course. Director Oliver Parker was inspired to write this story by the documentary Men who swim, which traced the unexpected success of a team of male synchronized swimmers from Sweden. However, Parker not only got the idea for his film from this documentary, but also the coach of the swimmers portrayed in it.

the Swede was hired to train the actors in synchronized swimming so that doubles didn't have to be used. After the synchronized swimming bootcamp the shooting could start. The result is a likeable film that won't win any prizes for originality and that is also a bit thick towards the end. But that doesn't matter at all. Because at the end of the day, the good mood triumphs over any criticism, no matter how justified. This is not only thanks to the charming story, but also to the wonderful ensemble.

Next to the comedian and actor Rob Brydon, who is very well known in his home country, especially Downton Abbey butler Jim Carter and Adeel Akhtar (The Big Sick, Four Lions) conquer the hearts of the audience very quickly. The great ensemble then helps the film get over some minor lengths and bumpy moments. In the end, nothing necessarily profound remains, but a blissful feeling of joy. And that is definitely worth the price of a movie ticket. Absolutely worth seeing

Cinema trailer for the movie "Swimming with Men (Großbritannien 2018)"
Loading the player ...