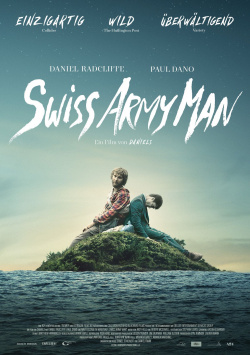 Hank (Paul Dano), stranded on a deserted island, has abandoned all hope of rescue. But just as he is about to end his life, a dead body (Daniel Radcliffe) washes up on the shore of the island. Completely unexpectedly, the bloated corpse becomes a salvation for Hank, as this undead version of a Swiss Army knife helps him not only get off the island, but also survive the difficult journey through the wilderness towards saving civilization. An unlikely friendship develops between Hank and corpse Manny as they journey together beyond the boundaries of what is commonly referred to as common sense. But is Hank really crazy?

To put it bluntly: Swiss Army Man is a very special film. The humor and the very playful, whimsical imagery are truly not everyone's cup of tea. But even then, if you're not comfortable with this unusual mix of comedy, drama, romance and fantasy, you have to give this film credit for simply never having seen anything like Swiss Army Man before - and what film can you say that about these days. Works with such originality have become an absolute rarity, which can't be overstated. Does that mean you have to like the film? Of course not, but even if you think it's terrible and not funny at all, you should be glad that there are still films out there that aren't completely mainstream, sequels, reboots or remakes.

If you can get into the special humor and the almost morbid-fairy-tale style of storytelling, you really get a particularly brilliant film here. It's not just the scenes that give Manny his titular name that make this quirky work so special. Although some scenes make you wonder what the makers have been smoking to come up with such really crazy ideas. But it's also the quieter, very imaginatively staged moments that give this Robinson variation its very special touch. If you feel that I'm beating around the bush a bit here, you're right. But I don't want to go into detail about these very special moments, because everyone should experience them completely unprepared. Because then this film is definitely a real experience!

The two actors transport the crazy story perfectly on the screen. Daniel Radcliffe, in particular, proves once again that he gives his all in order to play free of his Harry Potter image. As a farting all-purpose corpse, he is allowed to deliver tart slapstick interludes, but also a few somewhat profound moments - and he really does it with bravura. Therefore: If you always complain about the fact that there's nothing new to see in cinema anymore, if you have a soft spot for weird and artfully playful comedies and if you don't mind some crude, inappropriate humor, you shouldn't miss this movie. Absolutely worth seeing!!