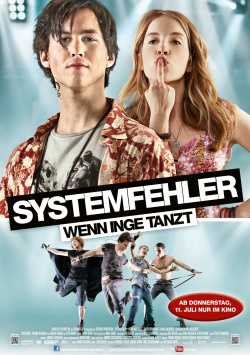 Max (Tim Oliver Schultz) and his buddies Fabio (Tino Mewes), Joscha (Constantin von Jascheroff) and Lukas (Thando Walbaum) have risen to minor local fame with their punk rock band Systemfehler. Especially their song Wenn Inge tanzt (When Inge dances) always causes great enthusiasm at their gigs. Max in particular doesn't care at all that the song made her classmate, the committed eco-activist Inge (Paula Kalenberg), look ridiculous in front of the entire school. The band is on the verge of a big breakthrough, so any means will do. But then guitarist Joscha breaks his arm during a gig and is out of action until further notice - and that just before an enormously important gig, which should bring System Error the long-awaited record deal. So a replacement has to be found. Too bad that the only adequate alternative is Inge of all people. She is actually persuaded to stand in for Joscha, but makes one condition: the band is no longer allowed to play Wenn Inge tanzt.

With Systemfehler - Wenn Inge tanzt director Wolfgang Groos tries after the two children's films Die Vorstadtkrokodile 3 and Vampirschwestern to a classic teen comedy, which uses the typical American pattern in many moments. The story doesn't really have any big surprises to offer and deep humor shouldn't be expected here either. But apart from a few almost annoying clichés the whole thing works pleasingly well on the bottom line. The catchy songs, which can be seen as a very mass-appeal variant of punk rock, the likeable actors and a wonderfully morbid Peter Kraus console over some of the weaknesses.

With some somewhat raunchy humor, but which provides a few decent laughs, and a well-tuned portion of teenage romance, the German comedy does not have to stretch before similarly knit US representatives of the genre. Particularly positive is that Groos does not rely primarily on rather simplistic gags of the lowered variety, bare facts and strained coolness, but allows enough space in between for the development of the characters and a few original and genuinely funny ideas.

Great, sophisticated cinema becomes System Error - Wenn Inge tanzt thereby not. But what the film wants to achieve - to entertain a rather youthful target group - it manages really well. The chemistry between Tim Oliver Schultz and Paula Kalenberg is absolutely coherent and proves that the makers had a really good hand in casting. But the secret star of the film is Peter Kraus as a former pop star who, despite being in the best of health, is constantly preparing for his death. His search for the perfect coffin, during which he wants to impart some important life lessons to his nephew Max, is undoubtedly one of the most amusing scenes of the film.

A few good laughs, a theme song that you won't soon get out of your ears, and a nicely realized story make System Error - When Inge Dances a teen comedy worth watching, which you can also enjoy as an adult without having to be ashamed of it. Especially for young viewers between 13 and 17 years absolutely worth seeing!