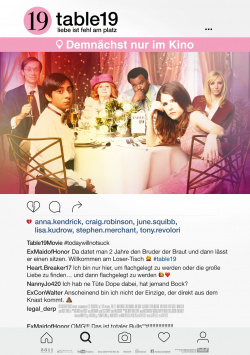 It could have been such a beautiful celebration. Because Eloise (Anna Kendrick) was supposed to be the maid of honor, standing next to her best friend at the altar at their wedding. But then her boyfriend Teddy (Wyatt Russell), the bride's brother, breaks up with her right before the wedding. And now she's no longer a bridesmaid, either, but sits at the back table at the ceremony, where all the unwelcome guests are shunted off. There Eloise meets a motley crew of strangers, between whom a kind of community of purpose is formed in the course of the celebration. But in the course of the day, some secrets are revealed at table 19 and the already gloomy mood at the table threatens to finally topple. But then the events take an unexpected turn - also for Eloise.

Table 19 - Love is out of place is a light comedy, sometimes a little silly and crude, then again surprisingly quiet and thoughtful tones. Responsible for this are besides director Jeffrey Blitz his co-writers Mark and Jay Duplass. The brothers have already perfected this exact blend of comedy and drama in their own directorial efforts Baghead or Jeff Who Still Lives At Home, but also in the series they created, Togetherness. However, the main story about Eloise and her secret that led her to the wedding despite her breakup with Teddy is not the strongest aspect of the film. For this plot line is very predictable and is full of clichés.

These are not overly implemented, but is just not really exciting either. The story's real appeal comes from the mix of endearingly quirky characters shunted off to Table 19. Whether it's young Renzo, who has finally put puberty behind him and is desperately searching for his first love - or at least his first time. Or the slightly overgrown Walter, who steps from one faux pas into the next. And then there's Jo, the bride's former nanny, and the couple Jerry and Bina, whose relationship seems to be on such a knife-edge that it could break up as a result of the day's events.

Jeffrey Blitz has directed an entertaining drama that has a few lengths and awkwardly extraneous moments to offer, but also quite a few funny or simply beautiful scenes. A nice indie comedy that doesn't reinvent the wheel, but on balance offers exactly what you can expect from a film of this genre. And for that there is a clear: Worth seeing!