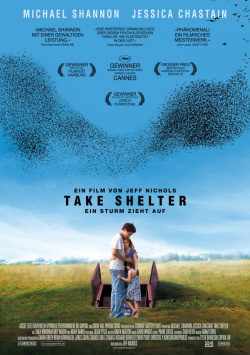 Curtis LaForche (Michael Shannon) leads a modest but content life in small-town Ohio with his wife Samantha (Jessica Chastain) and their daughter Hannah. Although the young family has to fight hard for every penny, they look happily into the future. But then Curtis is repeatedly haunted by dark nightmares in which he sees an apocalyptic storm brewing. What he initially dismisses as a disturbing dream soon takes more and more possession of his mind. Curtis is convinced that this storm is coming and that he must protect his family. And so he begins to expand an old shelter in the backyard. While the visions become more and more frightening, Curtis` behaviour also becomes more and more obsessive. His environment is increasingly irritated by this and even Samantha begins to turn away from her husband, frightened. But this does not change Curtis` conviction about the approaching apocalypse...

Take Shelter is a drama that will divide opinions. For some (and I definitely count myself among them), it's a great piece of work that will linger long in the memory with mesmerizing imagery and strong acting performances. For others, the film is just boring due to its very worn narrative and extremely long takes. You have to get involved with the film as a whole, with its staging, the meaningful acting of the actors and with the story, and that might not be possible for everyone. But those who like to venture into more unwieldy fare may be able to lose themselves in the story and its images.

When talking about the images, then of course the apocalyptic visions of Curtis are meant in the first place. Whether it's a destructive hurricane or flocks of birds behaving arguably strangely, these scenes are absolutely visually mesmerizingly realized. With very good effects for a small production like this and great camerawork, the oppressive heaviness of the visions is quickly transferred to the viewer as well, while at the same time the images are also of an almost hypnotic beauty that really burns itself into the memory in a lasting way. Regardless of what you may think of the finale in particular, the final shot of the film in particular is simply magnificent from a purely visual standpoint.

Michael Shannon, who also currently shines in the Martin Scorsese-produced Boardwalk Empire series, embodies the slow slide into supposed madness absolutely convincingly, and even if the whole thing drops in intensity a bit towards the end, his performance is one of the aspects that make Take Shelter such an impressive film. However, again, you have to be able to get into it, otherwise Shannon's acting may come across as a little over the top and annoying.

After over two hours, there are of course some unanswered questions, most notably what the whole thing is about. Is the story synonymous with a society increasingly terrified by the media? Is it meant to symbolize the feeling of many Americans that only they themselves should and can protect their families? Or is it perhaps simply about faith? About paranoia? Or about how families should defy all odds and stand as the last bastion against a decaying society? There are many ways the film, and most especially its finale, could be interpreted. And what will delight some and inspire lasting discussion will in turn confirm others in their conviction of the futility of it all.

If you don't mind when a director sometimes hits the brakes very hard, when a film allows for several possible interpretations and when so many a scene consists merely of melancholy glances, then you shouldn't miss this apocalyptic-tinged drama for its great actors and fascinating images alone. On the other hand, those who need some pace and a rather straightforward story to be entertained will definitely have to seek shelter from this film. Therefore, my personal recommendation is to be taken with extra caution this time as well: absolutely worth seeing!!