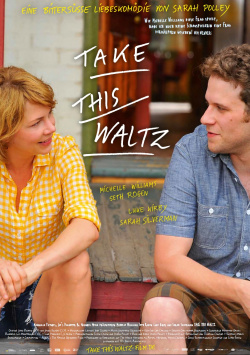 In cookbook author Lou (Seth Rogen), Margot (Michelle Williams) believes she has found her soul mate. The young couple leads an unexciting but extremely harmonious life in a quiet Toronto neighborhood. Margot is actually convinced that she is happy all around. But then, during a flight, she meets the articulate bon vivant Daniel (Luke Kirby), who flirts uninhibitedly with his seatmate. Margot enjoys the attention, certain she'll never see Daniel again. But when it turns out that he has recently moved in directly across from her, of all places, Margot's ideal world completely collapses. Time and time again, she breaks away from her usual life to indulge in exciting moments of romantic thrills. But is this little adventure really worth putting her marriage on the line, or has her love for Lou not long since expired?

With her second directorial effort, Take this Waltz, actress Sarah Polley approaches a subject that sooner or later becomes a problem in many relationships: Habit! At first glance, this often seems harmonious and beautiful. This is also the case with Margot and Lou. The little rituals that the couple have developed over the years are charming in their own way and testify to genuine love. But beneath the surface, there is often a feeling that something is missing. And when someone new comes into your life, you think you see in that person exactly what your partner can no longer give you: Passion and real fire. Polley succeeds very well in capturing this feeling and transporting it to the screen with a mixture of drama, humor and romance. With the help of Michelle Williams' great performance, the whole thing comes across as very authentic and in some scenes downright depressingly realistic.

However, the production sometimes gets lost in trivialities and overly extended dialogue, which also noticeably diminishes the emotional impact of the story. There are unnecessary lengths, through which the otherwise rather subliminal weaknesses reveal themselves much more clearly. The good acting of the cast and the coherent chemistry that exists between them does make even the weaker moments still worth watching. But the potential that the story and the ensemble provide is unfortunately not used to its full extent.

In too many moments, Margot's search for happiness, for the fire of passion, seems a little too one-dimensionally realized. So, of course, it's not Margot's fault that she's unhappy, but Lou's, who seems unable to grasp that his wife needs more than his closeness and security. The fact that she puts the marriage at risk and hurts her husband, who truly loves her, is also not condemned enough, but rather drawn as a natural step of a strong woman on her way to self-discovery. It's only at the end that this impression is set a tiny bit right. Still, it's a shame that Margot's actions are romanticized too much. Because whether she's falling in love with Daniel or just trying to get the kind of attention Lou no longer gives her, she's cheating on her husband. And that's just wrong and just not a sign of strength.

Not only that, but especially the last few minutes are great to discuss after watching the film. So Take this Waltz not only offers good entertainment for long stretches, but also a lot to talk about. This does not console over all weaknesses of the production, but makes the film at the end still: Worth seeing!

Cinema trailer for the movie "Take this Waltz (Kanada 2011)"
Loading the player ...