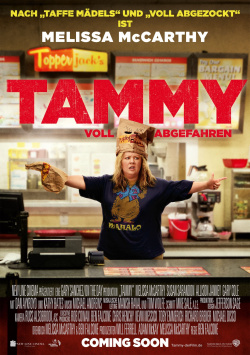 Can this day get any worse? First a deer runs out in front of Tammy's (Melissa McCarthy) already beat-up car, then she loses her job at a burger restaurant, and to make matters worse, finds out her husband Greg (Nat Faxon) is having an affair with their neighbor Missi (Toni Colette). Now Tammy's only option is to escape her previous life. But how can she do that without a car? Only her grandmother Pearl (Susan Sarandon) can help, as she not only has a car, but also a lot of cash. It's just too bad that Pearl wants to join her niece in any case, as she's been dreaming of seeing Niagara Falls ever since she was a child. But without Pearl, there's no car either, which could become a problem since grandma and niece don't exactly get along. But Tammy has to get as far away from her familiar surroundings as possible, so she accepts a road trip with Pearl. But it doesn't take long until she bitterly regrets this decision.

Tammy is a real family project. Lead actress Melissa McCarthy co-wrote the script with her husband Ben Falcone, who is also making his directorial debut with the comedy. And Falcone, of course, did not miss the opportunity to make a small guest appearance alongside his wife, as he did in Bride Alarm. For the realization of the film, the couple has both in front of (Susan Sarandon, Kathy Bates, Dan Aykroyd), as well as behind the camera (Will Ferrell as producer) prominent support. The result, however, is a very mixed affair. Sure, there are a few good laughs and really funny dialogue. But overall, the spark just doesn't really want to take off.

This may be because the film clings too tightly to the image that McCarthy has cultivated since the success of Bride Alarm, at least in the movies. While in Gilmore Girls she was still an extremely lovable and charming character despite minor neuroses, in her cinema roles she actually always plays the same chavvy character who puts more emphasis on the use of swear words than on personal hygiene products. McCarthy is really good at that, and it's not without reason that she's gained quite a large fan base this way. But at some point, it just wears thin and isn't funny anymore. And if the script reveals clear weaknesses, then such signs of wear and tear are also clearly noticeable.

Scenes in which McCarthy does nothing more than make a face or dance comically, could have in the environment of an igniting gag fireworks quite provide a few laughs. Here, on the other hand, the whole thing just seems too worn out and almost a little sad, with McCarthy reducing her perfectly good talent to a level that even her loyal fans can barely crack a smile at. Also, the fact that the mixture of humor and more serious moments seems badly unbalanced, especially in the last third, clearly dulls the enjoyment of this comedy. Since some scenes, especially those in which Pearl's drinking problem becomes uncomfortably apparent, are almost a bit depressing, a few lukewarm gags don't help to restore the lightness that makes Tammy quite amusing, at least at the beginning.

If you liked the flodder Melissa McCarthy from Bride Alarm, Totally Ripped Off, her cameo in Hangover 3 or from the hit movie Tough Girls, you're sure to have great fun with many of the scenes here as well. For instance, when Tammy makes a pass at the son of Pearl's conquest Earl (Gary Cole), feeling simply irresistible, it's just as amusing as her somewhat clumsy robbery of a fast food restaurant. But if you're expecting these kinds of gags on the run, you're in for a bitter disappointment. Tammy would like to be a very good outsider comedy, but in the end has become more of a half-baked mixture of chavvy slapstick and white trash drama, with good laughs and moments of annoyed eye-rolling roughly balanced out. Therefore: only with some clear cutbacks still worth seeing!